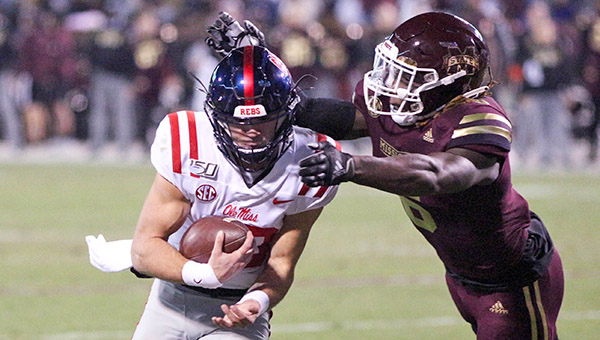 BIRMINGHAM, Ala. (AP) — The Southeastern Conference will play only league games in 2020, a decision that pushes major college football closer to a siloed regular season in which none of the power conferences cross paths.

The SEC’s university presidents agreed on a 10-game schedule that eliminates all nonconference opponents and is set to begin Sept. 26. The SEC championship game, originally scheduled for Dec. 5, will be pushed back to Dec. 19.

Each SEC team will have a midseason off week and Dec. 12 will be an off week for the entire conference.

“We believe these schedule adjustments offer the best opportunity to complete a full season by giving us the ability to adapt to the fluid nature of the virus and the flexibility to adjust schedules as necessary if disruptions occur,” SEC commissioner Greg Sankey said in a statement. “It is regrettable that some of our traditional non-conference rivalries cannot take place in 2020 under this plan, but these are unique, and hopefully temporary, circumstances that call for unconventional measures.”

The Big Ten and Pac-12 have already announced plans to play only conference games. The Atlantic Coast Conference this week announced a reworked 11-game schedule that left room for one non-conference game.

The ACC wanted to allow four of its schools to maintain in-state rivalry games with SEC schools, but now Georgia-Georgia Tech, Florida-Florida State, Clemson-South Carolina and Kentucky-Louisville have been canceled. That puts all ACC non-conference games in doubt because the conference had stipulated it would only allow its schools to play in their home states against non-ACC teams.

The delayed start for the SEC is two weeks later than the ACC’s.

The Big Ten and Pac-12 have yet to reveal detailed schedules but both could come as soon as Friday. Big 12 officials were holding out hope its 10 members would be able to play non-conference games, but options are dwindling. The SEC’s decision cancels LSU’s home game against Texas and Tennessee’s scheduled trip to Oklahoma in September.

Auburn was scheduled to play Southern Miss on Sept. 26, and that game is also now canceled. Auburn was also scheduled to open the season against Alcorn State on Sept. 5, but that game had already been canceled after the Southwestern Athletic Conference announced its plans to shift its season to the spring.

In a Twitter post, Southern Miss athletic director Jeremy McClain said his counterpart at Auburn, Allen Greene, reached out earlier Thursday to let him know of the SEC’s decision.

Conference USA, of which Southern Miss is a member, has not yet announced its plans for this season.

“I am disappointed for our student-athletes and our fans that this game will not happen, but we will make every effort to find a quality opponent to add to our schedule,” McClain tweeted. “Although the situation is fluid, we look forward to continuing to prepare for our season and will be communication health and safety protocols for The Rock to our fan base over the next few weeks.”

A revised schedule for the SEC season will be announced at a later date, following approval by the Conference’s athletics directors.

“While we are disappointed that we won’t be able to engage in a traditional non-conference scheduled for our fall sports, we fully support today’s decision and plan by the SEC, which is an important step toward providing our student-athletes with the opportunity to resume competition this fall,” Mississippi State athletics director John Cohen said in a statement.

One of Mississippi’s largest high schools will not be playing football — or any other sports — this fall. The... read more