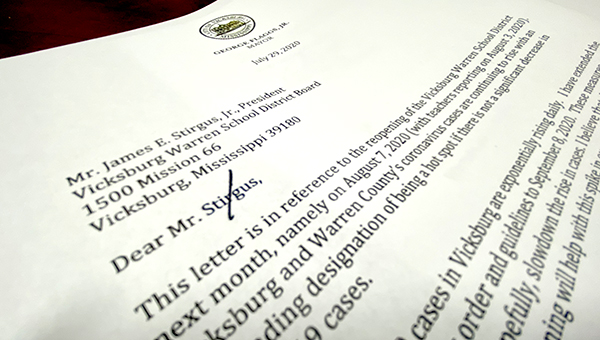 The trustees reaffirmed their plans to reopen schools on Aug. 7 at their regular meeting Thursday night. Stirgus’ comments about Flaggs’ letter came early in the meeting.

Friday morning, Flaggs issued a statement about the trustees’ decision to continue with their reopening plans.

“I respect the VWSD board decision and I prayed this morning that they are right,” he said. “The children are our future.”

When he was contacted Wednesday by The Post about the letter, Stirgus said he had not seen it.

Thursday, Stirgus said he was “very, very perplexed” why the mayor gave a copy of his letter to The Vicksburg Post, “instead of giving it to me first and to get a chance to read it.”

Flaggs said Friday that a copy of the letter was delivered to Stirgus hours before a copy was sent to the Post.

When told that Flaggs sent the letter to Stirgus before it went to The Post, Stirgus responded, “Would you please ask the mayor where he delivered the mail.”

According to information from the mayor’s office, an email version of the letter was sent to Stirgus at 12:29 p.m. and 1:28 p.m. Another email, sent to Superintendent Chad Shealy, was sent at 12:33 p.m. and another at 1:27 p.m. The letter was also emailed to Board of Supervisors President Jeff Holland at 12:35 and 1:27 p.m.

Also, according to the mayor’s office, a hard copy of the letter was delivered to the Vicksburg Warren School District’s central office at 12:55 p.m. by city compliance officer Tabitha Martin-Crawford.

“I don’t work at the central office,” Stirgus said. No one from the school district called him about the letter, he said.

At The Post’s request, after learning that a letter had been sent, a copy of the letter was emailed to the newspaper at 3:09 p.m.

While the letter discussed several topics, Stirgus focused on one issue — a paragraph that the Claiborne County, Clinton and Hinds County school districts were delaying in-person instruction until early fall and teaching the children through virtual learning.

“That is not factual,” Stirgus said, pointing out the Clinton school board held a special meeting Thursday morning to discuss reopening schools. “I’m wondering where he got his information.”

Clinton, he said, plans to reopen its schools Aug. 10.

“The safety of our students continues to be our top priority,” Stirgus said.

Stirgus said he believed some parents in the school district thought everyone had to report to school Aug. 7.

“That is not what we said,” he said. “Effective communication has been put on me and I apologize for those who got it wrong and it wasn’t explained.”

Stirgus said parents could send their children to school for in-person classes or opt for distance learning through virtual classrooms. During the Trustees’ meeting Thursday, Shealy said a recent poll of parents indicated 52 percent now want to use the distance learning option.

Previously, 49 percent said they wanted their children to participate in distance learning.

Stirgus said the personal protection equipment for students, teachers, bus drivers and other school employees has been delivered and is ready for distribution.

“Had they not been here, I would ask for a delay,” Stirgus said.

Shealy said he read Flaggs’ letter and talked with the mayor about the board’s decision.

Shealy said he called the school districts mentioned in the letter, saying Claiborne County planned to open Aug. 10 but pushed it back because of a roof problem at the high school. He said the virtual learning program Claiborne County is using is the same as the Vicksburg Warren School District.

The Vicksburg Warren School District trustees at a special July 14 meeting approved reopening schools Aug.7 and giving parents and students the option to either attend classes in person or stay home and participate in distance learning.

Under the VWSD’s reopening plan, students coming to school will be scanned to determine if they have a fever. Any child with a temperature of 100.4 degrees or more will be sent to a quarantine room, where their temperature will be taken again with an oral thermometer after a 10-minute wait.

If the second reading is below 100.4 degrees the student will be allowed to attend class. If the temperature remains at 100.4 degrees or higher, the parents will be called.

Students who are diagnosed with COVID-19 and will be away from school for a long period of time will participate in distance learning.

Students will be required to wear masks and engage in social distancing while in the quarantine room.

He said the students will receive five cloth masks — one per day — that can be washed and reused. Teachers and school employees will receive masks and face shields.

The Warren County Sheriff’s Office is continuing its search for a registered sex offender who has failed to re-register. There... read more