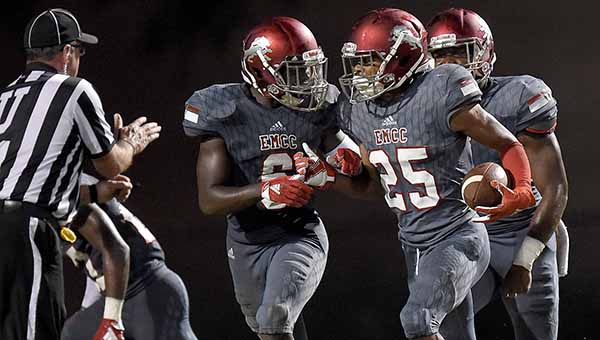 East Mississippi Community College football players Shavoke’ Herrington (6) and Kentavious McMillian (25) celebrate during a game last season. East Mississippi announced Tuesday that it will not play football this season because of concerns about the COVID-19 virus. (Chris Todd/Courtesy of East Mississippi CC)

SCOOBA — One of Mississippi’s top junior college football programs will not play this season.

The decision was made due to safety concerns related to the COVID-19 pandemic.

In a statement, East Mississippi said it will honor its players’ scholarships. Student-athletes will remain enrolled in classes either virtually or in person as full-time students and will retain access to facilities and support services.

“The well-being of my players will always come first,” East Mississippi head coach Buddy Stephens said in a statement. “There are too many unknowns to put in front of our players moving forward at this time. We must make this incredibly heart-breaking decision to not participate in the fall 2020 season.”

Earlier this summer, the National Junior College Athletic Association canceled the fall football season but announced plans to play in the spring. The MACCC, however, broke ranks from the NJCAA and announced its own plans for a fall season beginning Oct. 1.

It was not immediately clear if East Mississippi would attempt to play in the spring, or wait until the fall of 2021 to play again.

“Player safety is of the utmost concern. We understand the decision made by East Mississippi Community College and support their stance,” MACCC Commissioner Steve Martin said.

BIRMINGHAM, Ala. — One of the top NCAA Division II football conferences in the country has postponed its season. The... read more