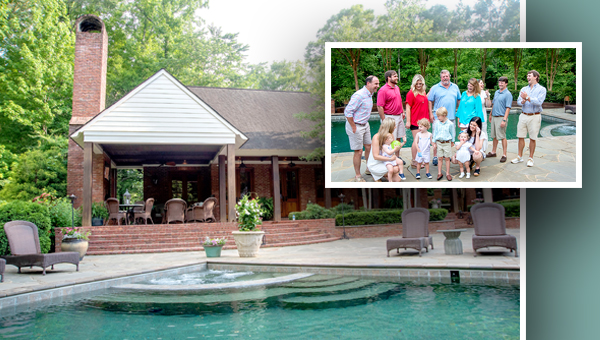 Pool and pool house: Just a few more reasons for the Waring family to get together

This feature was published in the July/August edition of Vicksburg Living.

Just ask Belynda Waring about her grandchildren and she begins talking 90 to nothing. While her husband, Howard, is a bit slower to speak when asked how the little ones are doing, the smile that appears on his face makes it apparent the love and affection he has for them.

Gatherings for the Warings’ seemingly ever-growing brood can get lively, but for the couple — the more the merrier.

And with this mindset, in 2007, the couple decided to do an extensive remodel to their “forever home,” which not only added more square footage to the house in an effort to accommodate family when they came to visit but also included a pool house with a bedroom and living space, an outdoor porch, an outdoor kitchen, covered porches and a pool.

“We decided to build a pool for our children and grandchildren after we saw a friend’s pool in Oklahoma that had a pool cover for safety,” Belynda said.

It wasn’t love at first sight, but after a second coincidental meeting at Belynda’s workplace, the pair began dating.

“I met Howard for the first time when I was 19. I was driving my baby brother, Mike to different friends’ homes to trick or treat. I walked up the steps to Merry and George Swan’s and was greeted by Howard at the door,” Belynda said. “I met him again while working at The American Bank and we started dating.”

Howard is a partner at Waring Oil and Neill Gas and Belynda said she is “thankful” to be a stay-at-home mom and grandmother.

Belynda said it wasn’t until after the birth of the couple’s first two children that she and Howard began thinking about building a house.

“We were getting tight for space and decided it was time to build our forever home,” she said.

That’s when she reached out to her brother, Sherwood Lyons, in hopes he would serve as their contractor.

“He is a talented carpenter and had built several homes, but he also worked full time,” she said.

Lyons agreed to help his sister and along with the siblings’ cousin, David Lyons, other family members and family friend Craig Watkins, the house was built and the family moved in on May 30, 1987.

The couple was “blessed” with two more children after moving into their forever home, and Belynda recalled some of the early days at the house when the kids were younger.

“We have so many wonderful memories here. The children played outside daily in the sprinklers and would run or drive their toys on their path to their other parents next door, June and Burton Boyd, who kept candy and toys for them,” she said. “We had the best neighbors with children their age who visited daily.”

Memories continued for the family following the full, down to the studs, renovation and addition to the lower level of the home, as well as the aforementioned outdoor living spaces.

For the massive project, Vicksburg contractor Robbie Cowart was hired.

Belynda said she and Howard chose Clifton Egger and Rick Griffin of Jackson to design the plans for the pool, the pool house and landscaping and Ron Carroll was used to install the landscaping. Also, Ricky Regents was hired to build the pool.

All projects were completed in 2008, allowing for the couple to continue sharing their home with friends and family.

“I look forward all year to Lyons and Waring Family Christmas,” Belynda said.

There are more than 50 people including children who turn out for Christmas dinner on the Lyons side of the family, which includes a visit with Santa, she said, and nearly the same number of family members when they host the Waring side of the family.

In addition to these holiday family gatherings, Howard and Belynda have also hosted engagement announcement parties, wedding and baby showers, Y’s Men Parties and birthday parties at their home.

They have entertained high school seniors with graduation parties, they have held dinner parties and hosted church gatherings.

With all the entertaining, Belynda said, it has been nice to have the pool house for extra space.

“The adults, as well as the children, love the pool table and the foosball table,” Belynda said. “We also enjoy the porch with the seating area with the fireplace and television while watching everyone swim. Many nights we watch a game outside and visit,” she said.

Howard and Belynda both come from large extended families, which could be why the couple is so family-focused.

Howard and Belynda’s paths had not crossed until that first chance meeting, she said, but ironically, they both grew up going to Crawford Street United Methodist Church.

There is a balcony in the large church, which could account for the couple not meeting up sooner.

The Warings are devoted to CSUMC and Belynda said they were delighted that all four of their children were married in the church.

Pierson, the baby of the family, married Madelon Cline, and they have two children, Daniel and Mary Cline.

Everyone lives in Vicksburg except for Leslie and Mark, Belynda said.

They live in Jackson, which hasn’t been a deterrent for visits.

“Our grandbabies know our house is theirs and they can use the pool whenever the sun is out and they want to come over,” Belynda said, adding, “The only rule is children have to be with an adult to swim.”

Their grandson, Daniel, Belynda said, has had his birthday party at the pool for the last few years.

“It was so much fun watching the children swim, play and open gifts. We’ve had bubbles, dress up, dancing, a slide, and the pool and because all the grandchildren are young I’m sure we will have many more parties for all of them,” Belynda said. “They know they can ask us for anything and Mama B and Pawpaw are ready.”

With a full heart and often a full house, there are quiet moments Belynda said, when it is just she and Howard.

“And in the morning there is nothing prettier than the sunrise over the trees and listening to the rooster crowing and the birds singing, and I can’t forget the red bird that comes to see us each morning and all during the day,” she said.

“God has been good to us. God, family and friends are the most important thing in our life. We cherish our time together and our memories and hope to make many more. We thank Him for His blessings,” Belynda said.

Culkin School remains a cherished memory for many

For many people driving along Culkin Road, the vacant, weather-stained concrete building at the intersection of Culkin and Mount Alban... read more