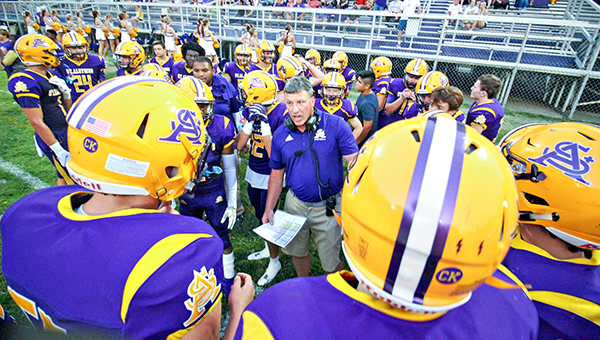 The St. Aloysius Flashes have found that the easiest path to success is to do nothing at all.

The Flashes did not play last week, but still added two wins to their total when a pair of opponents had to forfeit games. Hartfield Academy was penalized for using an ineligible player in its 43-0 victory over St. Al on Aug. 21, and Central Hinds postponed last week’s game vs. the Flashes because of a COVID-19 outbreak among its student body.

The Mid-South Association of Independent Schools has ruled the Central Hinds game a forfeit as well, improving St. Al’s record to 2-1 heading into this Friday’s home game against Parklane Academy.

“This is truly a crazy time,” St. Al coach Stacy Sizemore said with a laugh. “The only way we were going to be able to play Central Hinds was to do it on a Monday. So we’d have had to play Friday, Monday, and then Friday again. I don’t know if we can do that.”

St. Al learned of its postponement with Central Hinds in the middle of last week, which gave them an unexpected bye week. Sizemore said the team filled it by maintaining its regular schedule, except taking Friday off instead of playing.

“We had some kids with some nagging injuries, so that helped us,” Sizemore said. “We’ve talked about being flexible, so it wasn’t a big deal for us. We kept going along and working on fundamentals in practice.”

Since relying on forfeits is not a viable path to long-term success, the Flashes got back to a full practice schedule on Monday in preparation for their showdown with Parklane, an MAIS Class 6A program.

Parklane reached the MAIS Class AAAA-I championship game in 2017, but that was its only winning season in the past six. The Pioneers finished 6-6 the past two years, and lost 28-6 to Presbyterian Christian in their season opener last week. Despite that uneven track record, Sizemore said Parklane is a quality opponent. It beat St. Al 35-7 last season.

“Offensively, they do a lot of things. They run the ball from double-wing, two tight end sets really well, and then they can run the spread. Defensively, they have a lot of skill players. They present issues for us,” Sizemore said.

St. Al also has some issues of its own to solve. It did not score a touchdown and totaled less than 200 yards of offense in its first two games, vs. Hartfield and Greenville Christian. Sizemore said he’s starting to see some improvement on offense, but added the Flashes are not there just yet.

“We just want to settle in and find an identity on offense and what we’re going to be. We’re focused on that. The backs were starting to see things better and the offensive linemen are seeing their assignments. We need to do what we’re good at,” Sizemore said. “Our kids are playing hard and they work hard. It’s a process we’re going through.”