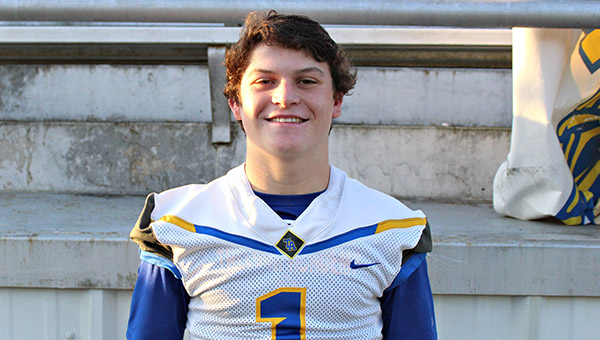 Tallulah Academy running back Walker Sullivan ran for 158 yards and four touchdowns in a 44-14 win over Claiborne Academy on Friday.

Tallulah Academy is carving out an identity as a slow-starting team. It’s also becoming one that finishes strong.

Walker Sullivan scored four touchdowns, and the Trojans scored 30 points in the second half as they routed Claiborne Academy 44-14 on Friday.

Tallulah only led 12-6 at halftime, and 18-12 in the third quarter, before blowing the game open by scoring four unanswered touchdowns. Last week, Tallulah was tied 6-6 at halftime with Delta Streets Academy before winning 22-12.

“It was the same as last week. We started off slow as all get out,” Tallulah coach Bart Wood said. “Our defense is playing super. We just stalled and had some stupid penalties. They came out the second half like a different team. They took care of business, were laying licks and doing everything else.”

Tallulah (3-0) will host MAIS Class 2A power Manchester Academy next Friday in its first true home game of the season. The Trojans have played two games in Mississippi because of COVID-19 restrictions in Louisiana, but those were finally eased this past week.

St. Aloysius soccer player Elizabeth Theriot had a goal and four assists in a 7-0 victory over Cathedral on Thursday.... read more