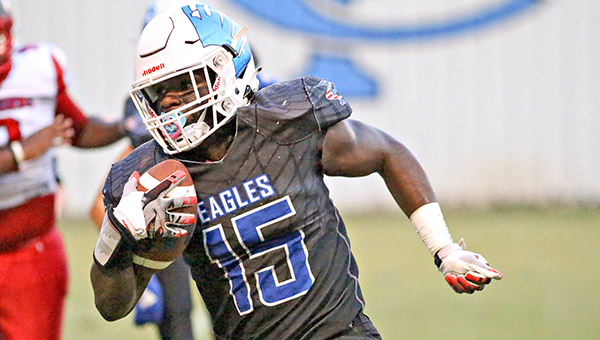 Porter’s Chapel Academy running back Tyler Washington (15) runs down the field against Claiborne Academy. Washington has posted back-to-back 100-yard games for the Eagles, who have scored 105 points in their last three games — more than they scored all of last season. (Walter Frazier/For The Vicksburg Post)

After years of struggling, PCA’s offense breaking out in a big way

Porter’s Chapel Academy and the words “potent offense” have not exactly gone together in recent years.

The Eagles have been shutout nearly twice as many times (18) as they’ve won games (10) since 2015. Three times in the past five years, they’ve scored 100 points or less for an entire season.
Along with everything else that has gone haywire in 2020, however, the Eagles have suddenly reversed course and are not only moving the football but scoring points by the bushel.

PCA has scored 117 points in its first four games this season — 17 more than it did in 10 games in 2019. A 52-38 victory over Claiborne in their last outing matched the program’s highest point total since 2013, and was its third win in a row.

As the Eagles (3-1) go for four in a row this Friday night at Hillcrest Christian, the offensive surge has provided an extra shot of adrenaline to a season that’s already shaping up as perhaps the program’s best in more than a decade.

“It’s good to see the work paying off. We believe we filled in some pieces this summer and would be able to do some things offensively,” PCA head coach Blake Purvis said. “It’s nice to see those plans in place and paying off on Friday nights, and not just some summer practice pipe dream.”

PCA’s offensive breakout coincided with a pair of eight-man football games on its schedule, against Deer Creek and Claiborne Academy. The Eagles scored 43 and 52 points against those opponents, respectively, and racked up 492 yards of offense vs. Claiborne.

Eight-man football allows for some extra space where the kind of speed PCA has in the backfield can thrive by creating big plays. Running backs Tyler Washington and Brayson Morson both have rushed for more than 100 yards in the past two games.

Washington, a junior, is in his third year as a starter. He has already matched last season’s total of four touchdowns, and with 399 yards is more than halfway to his 2019 total of 732. Morson, a freshman, has 286 yards and four TDs this season.

PCA struggled on offense in its season opener. In a 46-12 loss to Benton Academy, it committed four turnovers and only had 124 total yards — nearly half of which came on its first play of the season, a 61-yard touchdown run by Washington.

Since then, it has steadily gotten better. The Eagles did not put up a lot of yards in a 10-0 win over Newton Academy the following week, but controlled the clock, cut down on the turnovers and made big plays when they needed them.

They then rushed for 359 yards in a 43-20 victory over Deer Creek, and added a passing element against Claiborne. Quarterback Jace Riggs threw for 197 yards and three touchdowns, all to Ra’Darius Turner. Turner, a Port Gibson transfer, was playing his first game with PCA and finished with five catches for 168 yards.

The addition of Turner should also help open things up for Ricky Carraway, a capable receiver on the other side of the field who has been drawing a lot of attention from the defense on pass plays.

“We were dominant in the run game (against Deer Creek). Claiborne had a plan to stop the run and we were able to go to the passing game. It opened the run game back up for us,” Purvis said. “It’s a lot of fun. When you can have success, and guys are working and executing on the field, it opens the playbook up. The more you can do, the harder it is to defend and the easier it is for a play caller.”

PCA will transition back to 11-man football this week against Hillcrest, and the rest of its games this season will be that style of football. The extra players on the field will clog up some of the open lanes that helped the Eagles break out in their two eight-man games, but Purvis expected the switch to be a smooth one. The success they’ve enjoyed the past two games helps.

“When you can have success and get the ultimate success at the end of the game, you’re not just celebrating small victories,” Purvis said. “It helps validate the process. Our ultimate goal is to win games, and this has led to that.”

And, while the last couple of games have been great, Washington said the Eagles are well aware it won’t always be this easy. Hillcrest (0-4) is a Class 4A school whose depth will present a challenge, and consecutive games against Greenville Christian, Glenbrook and Greenville-St. Joe — all Class 3A powers that outscored PCA 151-0 combined last season — await in October.

“It feels good, but we also have to stay humble,” Washington said. “We’ve got tough games coming up. Those three games are in the past, and we have to worry about the future.”

St. Aloysius overcame an early three-run deficit to take the lead Tuesday against Park Place Christian Academy, but could not... read more