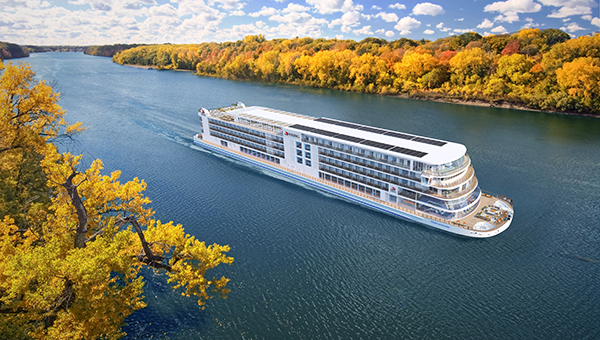 Viking Cruise Lines provided a rendering of the Viking Mississippi that is currently under construction in Mississippi.

Riverfront redevelopment moves forward as board signs agreement with railroad

The Board of Mayor and Aldermen took a step closer toward improving the city’s waterfront Wednesday, authorizing Mayor George Flaggs Jr. at a special called meeting to sign an agreement with Kansas City Southern Railroad involving rights of way between Levee Street and the Yazoo Diversion Canal.

City Attorney Nancy Thomas said the agreement sets out what needs to be done to clarify who owns what of waterfront property so the city can divide the waterfront and lease it to cruise lines to develop docking facilities.

She said the deeds for the various waterfront properties go back to the late 1800s, and it is very difficult to determine the properties’ boundary lines.

“The cruise ships, by way of Viking first, came to us and asked if they could acquire property on the Mississippi they could develop itself,” Flaggs said. “Others (cruise lines) joined in and we thought it would be in the best interest if we developed in a way the division of the parcels would be fair. We had to get Kansas City Southern involved because there was going to be some rights of way closed because of it.”

Flaggs said the agreement is part of Phase I of the city’s proposed Mississippi (riverfront) redevelopment that includes a pedestrian crosswalk on Levee Street, and parallel parking for tour buses to keep traffic open on Levee Street.

“One good thing about this is we won’t ever have to worry about the high water with the way we’re going to develop it because all of it will be north of the (flood) wall and probably be above the (high water) elevation,” he said.

He said the development of the docking facilities will be paid for by the cruise lines.

The pedestrian crossing is one of the stipulations of the agreement.

The city will also install fencing, relocate the China Street floodgate crossing, and close crossings on Hutson Street and two unused crossings on Haining Road at Ergon and CAM2. Work will also be done to define the railroad/city boundaries south of the waterfront to the KCS yard.

Flaggs believes the improvements will allow the city to attract people from “the state and this nation to come to Vicksburg and see the development and everybody who comes by cruise comes from around the world, any way to see Vicksburg.”

Laura Beth Strickland, executive director of Visit Vicksburg, said 12 cruises are still planned for the river beginning on Oct. 14. She added that number could change.

In April 2019, the city of Vicksburg signed a letter of intent with Viking USA LLC to lease a section of the city’s riverfront to the cruise line to dock its cruise boats.

In the agreement, Viking would construct a docking facility for its vessels and then pay the city of Vicksburg $1 per passenger. The proposed agreement would be for 20 years with a 5-year extension.

In February, the board and American Cruise Lines agreed to a 20-year lease involving a portion of the city’s waterfront to allow the company to build a dock for its boats visiting Vicksburg.

The board approved the agreement at a special called meeting and American secured the lease with a $5,000 down payment that was delivered Thursday morning to the city. The lease includes an optional five-year extension.

American is the first river cruise line to rent space along Vicksburg‘s waterfront for docking space. Viking Cruises, which plans to have cruises on the Mississippi River, has also expressed an interest in space on the waterfront for its boats.

Click HERE to view the video of Wednesday’s press conference with officials from the Vicksburg Police Department.   As officers... read more