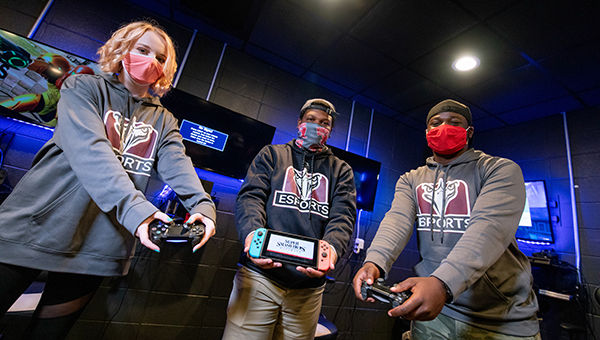 A team of 18 players will take the controllers in six games this fall season in a newly remodeled E-sports Arena on the Raymond Campus. Appearing on the program’s gaming consoles this fall are:

Hinds is the lone community college in Mississippi competing in e-sports, which was recognized officially in 2019 by the National Junior College Athletic Association. In fall 2019, former Hinds student Joshua Brandon, of Vicksburg, won the national championship in e-sports after an undefeated season in Madden NFL 19.

Players must maintain a 2.0 GPA, the equivalent of passing 12 credit hours, to be eligible to play.

The fall season is set to begin Oct. 5. The NJCAAE, the junior college sports governing body’s e-sports arm, has registered 60 member colleges in electronic video sports for 2020-21, including 33 new programs.

At Hinds, a former storage room inside the McLendon Library on the Raymond Campus has been renovated to accommodate the student activity, complete with six HDTV monitors and gaming stations, plus a coach’s corner to quickly track player academics at any given time. It also has a Wall of Champions, one to which Hinds Esports head coach Tiki Broome hopes to add more names to go along with Brandon’s achievement.

“We’re growing the sports we play in e-sports in response to demand,” Broome said. “There are a lot of students here who want to play. And we’ve just moved into a new space on campus to do that.”

The NJCAA hasn’t issued rankings on any sport this fall. But, Broome said, gaming-specific entities such as EA Sports have the e-sports team at Hinds ranked in the top 10 nationally.

One “returning starter” to this fledgling Eagle sport is Iquez Common, of Jackson, who advanced to the third round of tournament play in Super Smash Bros. last spring.

“I’ve loved playing video games — ever since I was a kid when I would play Sonic the Hedgehog,” said Common, who is pursuing a career in elementary education. “I Iove that I’m able to come to school, find something I love to do and help my school out.”

Jonathan Washington, of Clinton, who is studying communications in hopes of becoming a sportscaster, and Rivers Burnette, of Flowood, the first female student to participate in e-sports at Hinds, see it as a way to have fun, make friends and help each other achieve their academic goals at the same time.

“I grew up playing sports video games like NCAA Football and Madden,” Washington said. “For gaming to be part of college, it’s really neat.”

Burnette grew up playing video games with her father and is studying for a healthcare career, possibly in physical therapy, after battling illnesses as a child and spending a lot of time in hospitals. She sees gaming for Hinds as just another extension of the Hinds family spirit present in other competitive sports and student endeavors.

“The community of people is good to have here, because it’s harder to make friends in college — for me, at least,” she said. “Of course, you have to keep up with your grades like with other sports like football. It’s a lot of fun and the team here is like family.”