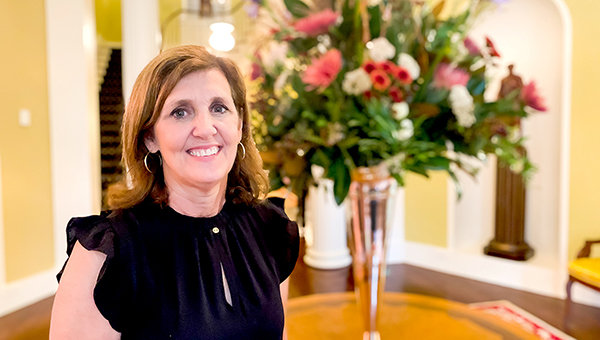 Fulcher honored to be among finalists to decorate Governor’s Mansion

Mississippi’s First Lady Elee Reeves wanted to honor first responders and frontline workers, and in doing so decided to hold a competition to decorate the Governor’s Mansion.

The Christmas at the Mansion competition gave florists across the state the opportunity to submit ideas for the mansion with the decorating emphasis geared toward those who have put the needs of others before themselves.

Reeves received dozens of submissions, including from The Ivy Place in Vicksburg, owned by Geni Fulcher, which was later selected among the final five finalists.

“It was great to be named a finalist. This is a very big honor and I was floored,” Fulcher said. She said the competition was posted on the First Lady’s Facebook page back in the summer.

Fulcher said she and her team, which included Emily Muirhead, Hannah Krapac, Torri Ghrigsby and Anna Kate Doiron, decided to compete, thinking it would “be something fun to do.”

With the focus on the frontline workers who have given tirelessly during the COVID-19 pandemic, Fulcher said she also wanted to keep in mind the reason for the season.

The Bible verse John 15:13, “Greater love hath no man than this, that a man lay down his life for his friends,” was used as inspiration.

“This is how God shows his love to us and it is how we are to show our love to others,” Fulcher said.

With this in mind, Fulcher and her team designed for 11 areas in the Mansion, some of which included the foyer, double Parlors, the State Dining Room, four of the bedrooms and the “wonderful” staircase.

“Some of the rooms almost told you how to embellish themselves because of the color, furnishings and grandeur of the space,” Fulcher said.

“Faux native foliage and trees, oversized wreath and gold finials were some of the obvious items to use,” she said.

And while the rooms in the mansion lent themselves to the festive décor, Fulcher said, “The rooms were not as much of a challenge as the need to portray the theme for each first responder.”

In the Rose Double Parlors, Fulcher’s design suggested that a mantelpiece could fill the space by cascading to the floor. It would be embellished with gold oversized angels and a ribbon with “We rise by lifting others” embroidered on it.

To add a little surprise to the Mansion, Fulcher said, “The Pumpkin Room” was decorated as if being seen through the eyes of a child.

With the notion of “when I grow up — I want to be,” she said, “The room was portrayed with assorted sizes of water globes featuring firemen, doctors, grocery store scenes, and other images showcasing frontline responders.”

Fulcher said in their design, garlands hung over a “beautiful” mirror, which was on the mantle in the room. The design also showed how the garland would be accented with miniature grocery carts, medical bags, fire trucks and other items representing the many frontline workers children aspire to become.

“Other rooms featured the medical responders, the Green Room honored the EMT, police, and firemen, and the Gold Room honored a unique group that has also risen to the top for us — truck drivers, restaurant employees, grocery store workers and others,” Fulcher said.

The team’s design also included a decorating plan for the exterior grounds of the mansion as well as the decorations on the outside of the mansion.

Fulcher said once everything was pulled together and ready to go, she then had to make a presentation at the mansion.

Fulcher laughed and said, “I had to put on my Ralph Null smile and go with it.”

Null, who was the director of the Retail Floral Design program at Mississippi State University when Fulcher was a student at the school, is an internationally recognized leader in floral arts and retail floriculture. His floral creations have appeared in many national and international publications as well as White House state dinners, presidential inaugurals and the windows of Saks Fifth Avenue. Fulcher said she and Null have remained friends and keep in touch regularly.

In addition to The Ivy Place, those named as finalists included The Willow Blu in Richland, Elaine Anders Designs in Brookhaven, Designs by Gail Manton in Brandon and Corinth Flowers in Corinth.

“This was such a great thing for our state to do,” Fulcher said. “And Elee is doing a wonderful job.”

In addition to the Christmas at the Mansion competition, Reeves chooses a different florist every month to provide flowers for the Governor’s Mansion. Fulcher was chosen for the month of September and for January 2021.

“This has been so good for our industry because we have all been so dependent on events and this has given us a little lift,” Fulcher said.