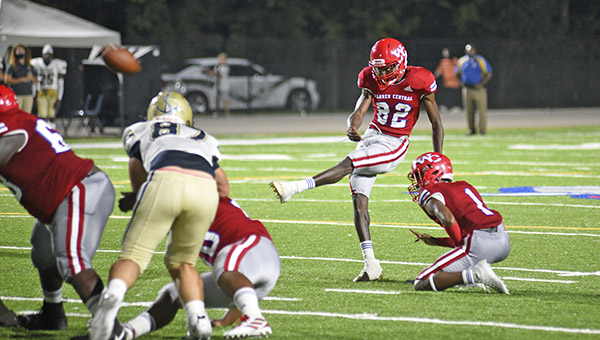 Whenever he lines up to kick the football, Josh Griffin has one goal — split the uprights.

Warren Central’s cannon-legged senior kicker has done it often this season when it counts, making three of five field goals and four of four PATs. He’s also made a habit of doing it on kickoffs, sending the ball through the goalpost on several of his 11 touchbacks.

It’s a habit that has given Griffin some notoriety, and a status as one of the best kickers in the state. He has helped the Vikings to an 6-0 record and last week was selected to play in the Bernard Blackwell Classic Mississippi All-Star Game scheduled for Dec. 19 at Mississippi College.

It’s the sixth time in seven years that a Warren Central player has been selected to play in the Mississippi All-Star Game.

“I just thank the Lord for it. It shows me that I’m being seen and finally being recognized,” Griffin said. “That’s just God’s work and I’m so grateful and humble about it. I can’t wait for the game.”

Griffin took over as Warren Central’s kicker in 2019 and made an immediate impact. He tied a single-season school record with 12 field goals, while also converting 19 of 20 PAT attempts.
He’s made three field goals in five games so far this season, which puts him eighth on Warren County’s career list with 15. The county record-holder is Sam Thigpen, who made 23 for Warren Central from 1983-85.

“I want to seal my legacy at Warren Central, so every field goal for me is one step closer. That’s what I’m working for,” Griffin said.

Griffin is more than just a placekicker, though. He has 11 touchbacks on 14 kickoffs this season, and 25 touchbacks on 60 career kickoffs. He said he aims for the goalposts — about 70 yards from the tee — every time.

“Every time. I get so upset when it doesn’t,” Griffin said with a laugh. “Everybody is looking for it now. It’s something I’ve been working for the whole summer. My whole summer has been dedicated to kicking. So now that’s my standard. You have to set a different standard, and that’s what I’m trying to do.”

Griffin also serves as Warren Central’s punter. He has a 38.9-yard average in the past season and a half, with about one-fourth of his punts getting downed inside the 20-yard line.

His skills there were on full display in an 8-0 victory over Madison Central last week. With less than two minutes to play in the fourth quarter, Warren Central faced a fourth-and-long near midfield. In a steady rain, and with Madison Central coming after him with a heavy rush, Griffin got off a 45-yard punt that was downed at the 7-yard line.

The play eventually led to a safety with 36 seconds left that provided the final points in the Vikings’ victory. In all, he averaged 53.8 yards on four punts, helping to flip field position and giving the defense some room to work with. The Vikings and Jaguars combined for less than 400 yards of total offense.

Warren Central coach Josh Morgan said he had faith in Griffin to get off a good punt on his final try against Madison Central. Moments earlier, Griffin had shanked one but a running into the kicker penalty negated the play. The Vikings still faced fourth-and-long after the 5-yard penalty, and Morgan figured his senior could do better if given another chance.

“One thing is getting it off. They were going to come after it,” Morgan said. “We had a decision to make. We were not going to take the penalty and just let them take the ball there, or we were going to trust Josh and trust (long snapper) Hartley Sullivan. Those are big decisions. We went with the trust in them and that really sealed it.”

Warren Central was supposed to play Murrah this Friday, but Murrah opted not to play this season because of COVID-19 concerns. Warren Central will instead have an open date and a forfeit victory, and will return to action next Friday at home against Clinton.

TICKETS:
Tickets for all Vicksburg High and Warren Central games must be purchased online at gofan.co

Vicksburg High running back Sha’Kori Regan carried the ball 32 times for a career-high 295 yards and two touchdowns in... read more