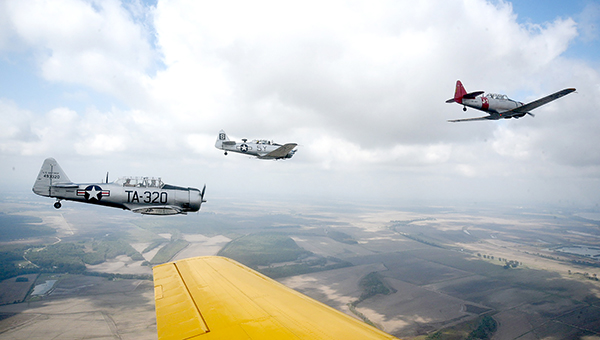 T-6 Texans fly in a formation during formation flying clinic Thursday at the Vicksburg-Tallulah Regional Airport in Mound, La. The clinic is among the events and meetings surrounding the “Warbirds, Wings & Wheels” event that will culminate Saturday at the Mound airport. (Courtland Wells/The Vicksburg Post)

The show, which will feature classic cars, hot rods and static displays of military aircraft, is being held in place of the foundation’s biennial “Best Little Air Show in the World,” which was postponed because of concerns about the COVID-19 virus.

The idea behind Warbirds, Wings & Wheels, Southern Heritage Air Foundation Director Patty Mekus said, was to have a family-friendly event that had the potential to raise money for the museum and the Warrior Bonfire Program.

Aeroshell, Mekus said, is donating its time for the show.

One of the featured aircraft on display at the show is the Commemorative Air Force’s C-47 transport “That’s All Brother” that led the airborne assault on Normandy for D-Day. The plane will be open for tours by the public and people will be able to fly in the plane for a fee.

The show is being held in conjunction with a formation clinic that began Thursday and runs through Saturday, where pilots work to earn their formation card that allows them to be able to fly in aerobatic formations.

“In between their formation flying, some of them may practice their aerobatics,” Mekus said. “It’s definitely not an air show, but there will be a lot of flying going on.”

Held every two years, the foundation’s Best Little Air Show in the World has drawn thousands of spectators from Louisiana and Mississippi to the Vicksburg-Tallulah Regional Airport to look at vintage aircraft and watch aerobatics.

Warbirds, Wings & Wheels opens at 9 a.m. Saturday. Admission is $10 per carload, and people will have the opportunity to win a Polaris 450 ATV and a trailer to haul it. Tickets for the ATV raffle are $25, or five for $100.

Recently, students at Redwood Elementary stepped out of their classrooms to show support for one of their own. The school... read more