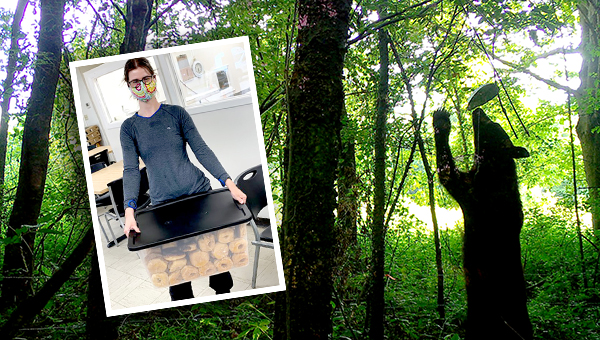 Several weeks ago, Mississippi State University doctoral student Lacy Dolan made a stop at one of the Divine Donut shops in Vicksburg.

While it may have been tempting to order up a few of the confections for herself, Dolan was there for another reason.

As part of the research for her dissertation, she was loading up a Tupperware bin with day-old donuts to use as a means to study black bears.

Dolan said the donuts are used as an attracter and once a bear goes after it, she is hoping they leave a little of their hair behind.

“We set up hair snare corrals, which are constructed by wrapping two strands of barbed wire around trees to create an enclosed area. We put a pile of sticks in the center with a scent lure on it, hang a piece of cloth in the center soaked in scent lure, and hang a donut in the center so hopefully, a bear will be enticed to enter the corral,” Dolan said. “As it passes over or through the barbed wire, hair gets ‘snared’ on the barb.

Dolan said the hair is used for genetic analysis to determine how many bears are coming in from neighboring states. The project will help estimate how quickly the Mississippi population is growing.

“I am trying to see if I am getting different individual bears, and with the bear’s DNA I can compare that bear’s DNA to the bears in Arkansas, Louisiana and Alabama and see if these are bears migrating into the state from those populations,” Dolan said.

If she continues to see the same bear for a few years, she said, that means the bear has decided to stay.

Research is also done on the remaining shaft of the hair follicle to do a diet analysis, Dolan said.

“We want to know where they are getting their foods from,” she said.

With agricultural land being interspersed between forest, Dolan said, crossing can be a deterrent for the bears, “But if bears are snacking on some of the crops they go through, this may be a way they get from forest patch to forest patch,” which will aid in colonization.

Dolan is working with her academic advisor, Dr. Dana Morin at MSU, on the research project as well as the Mississippi Department of Wildlife, Fisheries, and Parks, the Fish and Wildlife Service and the Forest Service.

The idea to use donuts is not original, Dolan said. Researchers from the MDWFP used donuts with a lot of success when capturing bears to tag and collar for data.

“So they have used donuts and told me it worked like a charm,” she said.

Dolan said she happened on Divine Donuts when driving to her field sites that were located from Bolivar County to Wilkinson County, and which included Warren County.

“I found out about Divine Donuts by mostly driving through. A lot of my field sites have been in western Mississippi so there was a lot of driving through Vicksburg. I saw Divine Donuts a few times off of 61 North and also one of the landowners I was working with in Issaquena County, he owns the Atwood Chevrolet, suggested reaching out to them.”

Becky Yelverton, who is the owner of Divine Donuts in Vicksburg, said this was not the first time researchers have asked her for donuts so they could collect data on bears, so she already knew what the furry animals liked.

“The bears especially like the jelly-filled donuts,” Yelverton said.

Dolan reached out to Yelverton to see if she could pick up some donuts. After getting a thumbs up she stopped by the shop to pick them up and left with a Tupperware container with around 80 or 90 donuts in it.

Currently, Dolan said the number being “thrown around” as to how many black bears are in the state is 250.

“Black bears suffered a severe population decline in Mississippi through the 1930s when only about 12 bears remained. Black bears from neighboring states — Louisiana, Arkansas, and Alabama — are immigrating to Mississippi and recolonizing, but we don’t know the rate at which this occurs, and it seems to be slow,” Dolan said. But if females are found sticking around, and having their cubs, they call that successful colonization.

Dolan is working toward her Ph.D. in Forest Resources and this summer completed her first field season with wildlife projects. She will continue next summer and into the summer of 2022 collecting data that will be used for comparisons.

Mississippi has a storied history with Black Bears.

In 1902, the Governor of Mississippi invited President Theodore Roosevelt to come to Mississippi for a bear hunting trip that was near Onward.

Regrettably, Roosevelt had not located a single black bear during the hunt.

But with the aid of hunting guide Holt Collier, a black bear was cornered and tied to a willow tree.

Roosevelt was then summoned and it was suggested that he shoot the animal.

Roosevelt, who was a big game hunter, refused to shoot the black bear, viewing it as unsportsmanlike conduct.

Word got around of Roosevelt’s refusal to kill the bear and a political cartoonist who heard about the incident drew up a satirical image of Roosevelt refusing to shoot the bear. After the cartoon appeared in the Washington Post, a Brooklyn candy shop owner and his wife, who made stuffed animals, decided to make a stuffed toy bear and dedicated it to the president. It was called “Teddy’s Bear.”

After months of study and feedback, the U.S. Army Corps of Engineers released a report Friday that lays out recommendations... read more