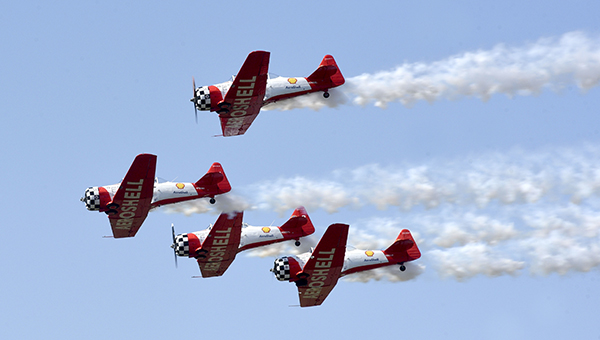 MOUND, La. — Wrapped with double blankets against a cold morning wind, 94-year-old Foster Story sat in a chair near the runway at the Vicksburg-Tallulah Regional Airport in Mound watching a pair of AT-6 aircraft take off.

“He said he wanted to see the airplanes, so we brought him,” his great-niece Dee Roberts of Vicksburg said.

“I’m enjoying myself,” Story, a U.S. Army veteran of the Vietnam War, said. “I was in the Army 21 years. I was on the DMZ (demilitarized zone). I was in Hawaii and got sent to Vietnam. It took us 11 days to get there. I told people, ‘I went from heaven to hell in 11 days.’”

Story was among the large crowd of people from Louisiana and Mississippi who attended the Southern Heritage Air Foundation’s Warbirds, Wings & Wheels show at the Vicksburg-Tallulah Regional Airport to benefit the foundation and the Warrior Bonfire Program.

The event replaced the foundation’s biennial “Best Little Airshow in the World,” which was canceled out of concerns for COVID-19.

“This crowd is amazing; it has gone beyond our expectations,” Foundation Director Patty Mekus said. “We didn’t have any advertising because we didn’t have the money, so it was by word of mouth, people talking to their neighbors.

“We were already breaking even before the gates opened so anything today is great for us and the Warrior Bonfire Program,” she said.

The event featured displays of World War II-era aircraft, classic cars and hot rods, military vehicles and a demonstration by the Aeroshell Aerobatic team flying AT-6 aircraft that had spectators searching the skies.

The cars and aircraft competed for the attention of the crowd, as people crowded around the parked planes and cars on the airport tarmac.

“This is my first time here,” said Mary Cannon of Rayville, La. “My neighbor told me about it. She said it wouldn’t be as large in the past but there’s a lot of planes and a lot of people here. I enjoy looking at the planes. It’s a bit windy today, but it’s OK.”

Her husband John didn’t care for the planes.

“I’m here for the cars; take me back to the day,” he said. “When I was growing up, you’d see a car coming down the road and you could tell if it was a Buick or an Oldsmobile. Now you can’t. But this is great; it’s a nice day and the people are friendly.”

The Vicksburg Cruisers car show drew the attention of many people who, like John Cannon, came to walk among the rows of Corvettes, Mustangs, vintage cars and rods.

There were others who took advantage of the parked planes to fill their passion and curiosity by examining each metal bird.

Drawing the most attention was the Commemorative Air Force Douglas C-47 “That’s All, Brother,” which led the air assault over Normandy on D-Day, and the TBM Avenger honoring Navy pilot Guy McAdory Brown. Brown and crew were killed in July 1945 attacking the Japanese battleship Haruna.

“That’s All, Brother” took off during the early part of the show and flew over the field before landing for tours of the plane.

One of its admirers was Nancy Welch of Brandon who, with her husband, is a member of the Commemorative Air Force in Mississippi. Welch was walking around the plane getting pictures from different angles.

“Dan Fordice is a member of the wing and we volunteer when there’s something here,” she said. “I got my husband a ride on ‘That’s All, Brother’ for Christmas last year. This was the lead plane in the air attack over Normandy; it’s a piece of history. That’s awesome.”

Also interested in “That’s All, Brother” was a group of 12 children from Tallulah, La.

Sharonda Jones, one of the adults with the group, said the children were part of a preventive measures group.

“We take children on outings on the weekends,” Jones said. “We do something every time there is an event. This is their first time to be close to airplanes. They love it. We’re waiting for the air show.”

Also waiting on the Aeroshell demonstration was Idaho resident Rick Matkin and his wife Lynn, who were wearing Boise State University shirts and sitting in orange and blue BSU chairs.

The couple was visiting their son Nic, who lives in Vicksburg.

“This was a nice coincidence,” he said. “We came for the air show, but then I saw the car show. I have a show car (a Corvette) so I had to go over and take a look. The car show was an added extra.

“This is nice, the weather’s good, the people are friendly and we’re enjoying it.”

Everybody knows bears like honey, but it seems they like donuts, too. Several weeks ago, Mississippi State University doctoral student... read more