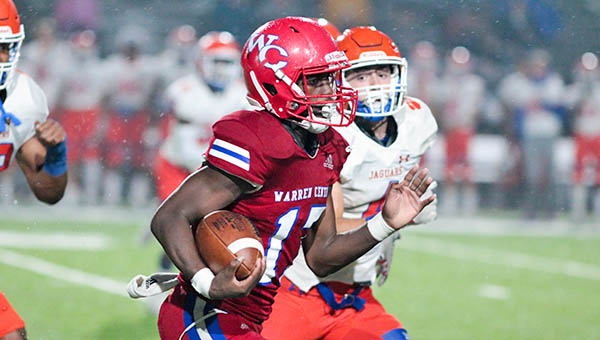 Warren Central running back Tre Hall (17) carries the football earlier this season. Hall and the Vikings will host Clinton on Friday night, with a chance to clinch their first Region 2-6A championship since 2004. (Walter Frazier/For The Vicksburg Post)

When the week began, Warren Central was preparing to take on one of its biggest rivals with a chance to lock down a playoff berth.

Suddenly, it has a chance to play for a whole lot more.

Starkville head coach Chris Jones announced Tuesday night that his team will have to quarantine for two weeks because five players have tested positive for the COVID-19 virus. The quarantine will force Starkville to forfeit next week’s game against Warren Central, and opens the door for the Vikings to clinch the MHSAA Region 2-6A championship if they can beat Clinton at home on Friday night.

“It’s unfortunate for Starkville, but a lot of people have had to go through that. I hate it for those coaches and kids,” Warren Central head coach Josh Morgan said. “It goes with what you’re dealt. I don’t want to make it a big deal because we have a very big game this week and we’re trying to look only at that. I hate for any team to have to go through that, because we’re all dealing with it.”

The Region 2-6A playoff race has undergone a seismic shift in the past week. No. 4 Starkville (5-1, 3-1 Region 2-6A) won the region title four times in the last six years and seemed headed toward a fifth until its 15-game winning streak inside the league was snapped with a 15-9 loss to Madison Central last Friday. Then its COVID-19 issues surfaced this week and likely ended its title hopes.

Starkville has an open date this week, when it was originally scheduled to play Murrah. Murrah opted not play at all this season because of COVID-19 concerns. Starkville’s next game would be Nov. 6 at Clinton if its players are healthy.

The big beneficiary is No. 2 Warren Central (7-0, 4-0). The Vikings are the only undefeated team in Region 2-6A, and hold at least a one-game lead on most of the other teams in the region either through their record or head-to-head tiebreakers. Beating Clinton on Friday would give Warren Central a two-game lead on every other Region team with one to play, once next week’s forfeit win over Starkville is added to its record.

Warren Central has not won the region championship outright since 2004. It finished in a three-way tie for first in 2013.

“Winning those games early on, going week to week, has put us in that spot. Nothing changes as far as the mindset, and the grind of the season. We have to stay focused on Clinton,” Morgan said.

Although a huge prize is on the line Friday night, Clinton (4-2, 3-1) is a formidable obstacle on the path to it. The Arrows have already knocked off a couple of brand-name programs in Brandon and South Panola, and have a chance themselves to win the region title if they can add Warren Central to the list.

Clinton has also been a particularly difficult opponent for Warren Central to overcome. Six of their nine meetings since 2012 have been decided by seven points or less. The Clinton-Warren Central game has often been a pivotal one in the standings as well, either determining a playoff berth or seeding. In that sense, nothing has changed this week despite the other major shifts in the Region 2-6A playoff picture.

“They’re right in the middle of this thing as well. Right now, I think there are three teams that are technically in second with one loss, so they’re very much in the thick of things along with ourselves,” Morgan said. “The magnitude of the game carries a lot of weight, and there’s no way around it.”

Clinton only has a 20-18 record since winning the 2016 Class 6A championship, but Morgan said this year’s Arrows are a talented team starting to come into their own.

“They were a young team last year, so they’re an experienced football team, they’re very athletic and they’re very physical,” Morgan said. “I’m not so sure they’re not the best team that we’ve played so far. They’re a really good football team that’s getting better every week.”

So, it seems, is Warren Central. The Vikings’ defense has only allowed three touchdowns in five games — two of their wins were forfeits — and have a plus-5 takeaway margin, along with 53 tackles for loss and 15 sacks as a team. Seven different players have recorded a sack.

Morgan said the contributions from players throughout the roster — on special teams and offense, as well as on defense — have started to generate a bond among the players and a feeling that this might be a special year.

“It’s been different guys every week. It’s been multiple guys during the week. It’s just a really nice collective effort and a team effort, and that’s what we want to be,” Morgan said. “We want to be able to count on the man next to us and trust, but also compete at a high level. We’ve been fortunate enough and they’ve taken it on to be great, and are working at being great. If we do make a mistake, usually our pursuit and hustle has gotten us out of some jams. It’s been a good collective effort by that group.”

As the season has unfolded, the Vicksburg Gators have started to cast an eye toward the future. A half-dozen freshmen... read more