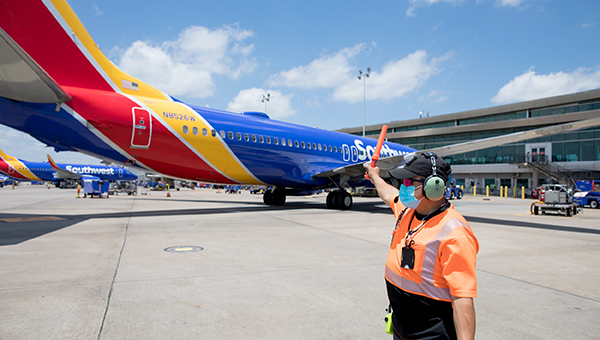 It was announced Thursday that Southwest Airlines is returning to the Jackson-Medgar Wiley Evers International Airport beginning in 2021. (Stephen M. Keller)

Southwest Airlines returning to Jackson in 2021

JACKSON (AP) — Southwest Airlines will start offering flights to and from Mississippi’s capital city in 2021, about seven years after the low-cost carrier stopped the service.

“We are leveraging additional airports in cornerstone cities where our customer base is large, along with adding easier access to popular leisure-oriented destinations from across our domestic-focused network,” Kelly said.

Southwest offered flights to and from the Jackson airport for 17 years, but it stopped in June 2014. That departure was among reasons the state tried to take control over the airport board from the city, sparking a lawsuit that is still in court.

Jackson Mayor Chokwe Antar Lumumba praised the Jackson airport board and CEO for working to bring back the carrier.

“It’s great news for our city and great news for travelers throughout the region who have been missing access to Southwest’s accessible flights and low fares,” Lumumba said in a news release.

The city of Jackson sued in 2016 to block a law signed by then-Gov. Phil Bryant, which would have removed Jackson’s role in appointing the five-member board overseeing the airport.

The law would have created a new nine-person board, four of whom would be appointed by the governor or his appointees. Jackson’s mayor and city council would get one appointment each; suburban Madison and Rankin counties would get one each; and the lieutenant governor would get an appointee. The airport is located in Rankin County.

Legislators who pushed for the change argued, in part, that Southwest’s departure was evidence of poor management by the five-member airport board, even though airline executives said the decision was made for financial reasons.

Jackson and airport officials have called the airport restructuring law a hostile takeover. The Federal Aviation Administration said it would not consider approving any change until courts resolve the struggle.

Democratic Sen. John Horhn of Jackson told WLBT-TV that with Southwest returning, he wants to try to repeal the law on restructuring the airport board.

“The arguments from the get-go were hollow,” Horhn said. “They were just smoke screens to cover the Republicans’ desire to … control the airport and wrest control from the city of Jackson.”

“It’s not a takeover in my mind, but an expansion of the board,” Harkins said.

JACKSON (AP) — A Democrat trying to unseat a Republican U.S. senator in Mississippi said Wednesday that he has received... read more