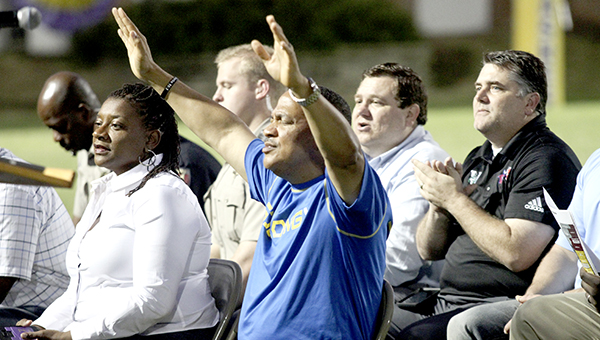 FCA’s Fields of Faith to be broadcast Wednesday

The Mississippi Fellowship of Christian Athletes’ annual Fields of Faith event is moving from the football field to video.

The ninth annual event, which has been held at St. Aloysius’ Farrell Stadium, will be broadcast Wednesday at 6:30 p.m. over the city of Vicksburg’s VTV local annex channel, YouTube and the Vicksburg Warren County School District’s Facebook page. All four Warren County area high schools are expected to participate.

Guest speaker for the event is the Rev. Reggie Harris, pastor of Bright Morning M.B. Church in Vicksburg and coordinator of recruiting for Hinds Community College in Raymond.

Fields of Faith is a student-led and student-driven event where young people gather to stand together against the pressures and temptations in our world and be a generation committed to reading the Bible and applying it to life.

Students invite, pray for, share with, and challenge their peers to read God’s Word and follow Jesus Christ.

The event is held on an athletic field because it is an area everyone is familiar with and is a neutral, interdenominational site where the athletes can gather.

Fall is in the air, which means it’s time for the annual Germanfest organized by the Lutheran Church of the... read more