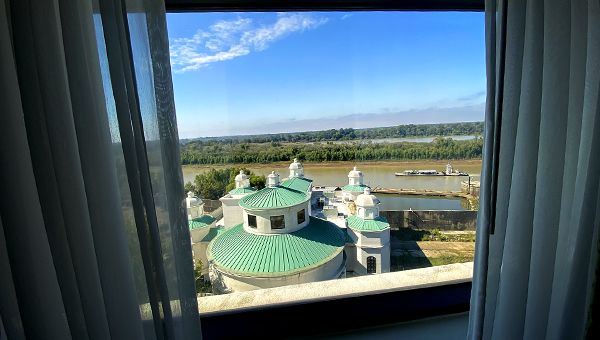 Downtown Vicksburg is just weeks away from once again being able to offer hotel accommodations.

Officials with Lodging Leisure Investments, LLC announced Tuesday the riverfront hotel that once carried the Margaritaville name will open in a few weeks with a new name, Riverbend Hotel.

“We are actually set and ready to rent rooms now,” Buce said. “We are just working to get the lobby situated and getting our point of sale systems and hotel integration, with the likes of Expedia, Hotels.com and those partners, set up.”

In addition to the technical work needed to reopen, she said the staff is currently doing some cosmetic work, such as painting, and going through the property replacing beach-theme with river and delta-themed images.

Buce said a new company name will be established over the hotel, but it will remain a subsidiary of the Biloxi-based Lodging Leisure Investments. The company operates hotels, mainly along the Mississippi Gulf Coast, including Margaritaville Resort Biloxi, Centennial Plaza Gulfport, White House Hotel, Markham Hotel in Gulfport and more.

Even though the hotel is reopening, it will not reopen with a restaurant or the arcade that was a popular destination for children.

“We will not have a restaurant and arcade right now,” Buce said. “We will have the pool and we are changing the coffee shop to more of a micro-market.”

She said although the restaurant and arcade will not return initially, there is a bright future for the space that they once filled.

“Right now, we don’t have a plan for it, I did speak with the owner and he is open to someone leasing it for some kind of business, but not until after the first of the year,” Buce said. “If you think outside of the box, there is a lot you could do with that space because it is so big.

In addition to being welcome news for downtown businesses, the return of a downtown hotel was thrilling news to officials with the Vicksburg Convention Center.

“The VCC needs plenty of partners to be successful. A key partner is a close proximity hotel and we were beyond pleased to learn of the reopening of the hotel next door,” Vicksburg Convention Center Executive Director Annette Kirklin said. “With the market being slow to start back, it is comforting to know that the Riverbend Hotel will be a great offering to the event planners. Some of the events we lost due to COVID will also be elated to know of the opening once their dates have been rescheduled.”

Buce said the relationship between the hotel and the convention center is important.

“We work really close with the Vicksburg Convention Center,” Buce said. “Annette was so excited when I told her we would be reopening. We have a good relationship. Hopefully, we can make something happen down here.”

Due to the impact the months-long COVID-19 pandemic has had, particularly the negative impact on the tourism and convention industry, Buce said the hotel, under the Margaritaville banner, had to close on Aug. 23, which made the opportunity to reopen — even if it is under a new name — such a relief.”

“We are just so happy, relieved to be reopening. I’ve made a lot of good friends in Vicksburg,” Buce, a native of Mobile, Ala., said. “We have all been down since we had to close, but we are excited once again. It is a really good turn of events.”

And, since the restaurant is not part of the reopening plans, Buce said that will give her a chance to form new partnerships.

“I try to involve the businesses on Washington Street, and since we don’t have a restaurant now, I will be much more involved with local restauranteurs to get people to experience our restaurants. I’m looking forward for visitors to come here and experience downtown Vicksburg for themselves.”

Buce said that once a reopening date is set then she and the hotel’s leadership can begin hiring for the positions that must be filled. Many of those employees who lost their job when the hotel closed in August, Buce said, “thankfully were able to find other jobs.”

Officers honored for service ‘beyond the call of duty’

“To protect and serve” is the mantra of every police officer. Tuesday, three officers with the Vicksburg Police Department were... read more