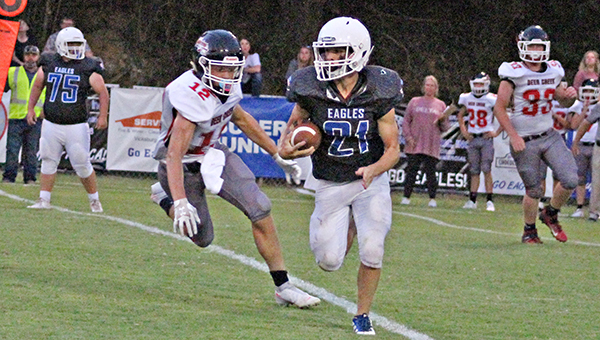 Porter’s Chapel Academy running back Brayson Morson (21) carries the football during an 8-man game against Deer Creek earlier this season. PCA will switch from 11-man to 8-man football beginning with the 2021 season. (Ernest Bowker/The Vicksburg Post)

Porter’s Chapel will switch to 8-man football in 2021

When they played a couple of eight-man football games the past two seasons, it was a quirk in the schedule for Porter’s Chapel Academy.

Beginning next year, it will be the entire schedule.

Purvis said the decision was based on several factors, all of which had a common theme — a changing landscape in the MAIS’ smallest 11-man classification that left PCA with fewer similar-sized opponents and a widening competitive gap, as more and more small schools switched to 8-man football.

“Traditionally, all of the schools that Porter’s Chapel has competed with in 11-man have dropped to 8-man. We hung on in 11-man probably longer than anybody our size. It came to a point where our numbers made it difficult to compete at the level we did in the 2000s,” Purvis said. “All those teams we were playing in the 2000s have dropped to 8-man. Your landscape has changed, and it’s almost led you to the point where we are what we are. We have always been a small private school, and we felt it was best for our program and our school.”

PCA has not had a winning season in football since 2008. Out of the 13 MAIS teams it played that season, five have closed or left the association and five others have since switched to 8-man.

That shift in football demographics, Purvis said, has left smaller schools like Porter’s Chapel in the difficult position of having to compete against opponents with a much deeper talent pool. PCA only had about 30 boys in grades 8-11 in the last realignment cycle in 2018.

He added the difference in size between schools can make it difficult not only to win games but to survive a season once injuries set in and starters are replaced by younger, inexperienced players. PCA had 28 players on its roster this season, 11 of which were in eighth or ninth grade.

“With the lack of depth, it becomes a safety issue when you lose some of your older guys. This is a better option in terms of that,” Purvis said.

Although it will fully jump into the 8-man pool in 2021, PCA is not a stranger to it.

Because of low numbers the junior high team has played 8-man football for the past three years. The varsity has also played four 8-man games in 2019 and 2020 — ironically, because there were not enough 11-man teams in Class 3A, the lowest 11-man classification, to fill out a full, even and fair schedule.

PCA has a 13-4 record in its 8-man games the past two seasons, and its junior high team went undefeated in 2020. The varsity team finished 4-6 overall this season, with two of it wins coming in the 8-man games against Deer Creek and Claiborne Academy.

“We’ve been 13-4 in our 8-man games the last two years between the junior high and high school. That presents a valid argument for the size of our school and who we’re a better fit to be competitive with,” Purvis said.

Purvis added that having seen and prepared for so many 8-man games also gave him a bit of an epiphany after years of being sour toward it.

Unlike its early days, when high scores and offensive shootouts were the norm, the 8-man division has settled into a more normal rhythm. There have only been 14 games this season in the MAIS’ two 8-man classifications in which the winning team scored more than 60 points, and most of those were lopsided blowouts more attributable to differences in talent rather than a lack of defense.

The Eagles’ success in 8-man football gave Purvis an optimistic outlook on how the transition will go in 2021. Unlike some other teams that have made the switch and had to adjust to new rules and style of play, they should be able to hit the ground running with a host of players familiar with the differences.

“Our freshman class that will be sophomores, that’s all they have played in junior high. They obviously will have a better feel for it. And playing those 8-man games in high school will give us a starting point and something to build off of with the older guys,” Purvis said. “I’m looking forward to next year. Coming off an undefeated junior high season, and with our track record in 8-man, I’m looking forward to the group we have and the potential for success that they have, and being able to compete at an extremely high level.”

Purvis noted that some teams have switched back to 11-man football after spending time in the 8-man division, and did not rule out a return if PCA’s enrollment increases or the make-up of the smaller 11-man classifications changes. For now, however, he believes going to 8-man is good for the program.

“I believe we made a great effort to continue to play 11-man, but the landscape of the MAIS changed,” Purvis said. “Change is always hard. There are always people that are going to be resistant. There are pros and cons to 8-man and 11-man. Talking to (Head of School Chris Williams), and our coaches, and our lead team, we found more pros than cons with 8-man. We believe we made, for the next two years, the best decision for our football program, our school and our kids.”

HATTIESBURG — For the second time this season, Southern Miss is dealing with the sudden resignation of its football head... read more