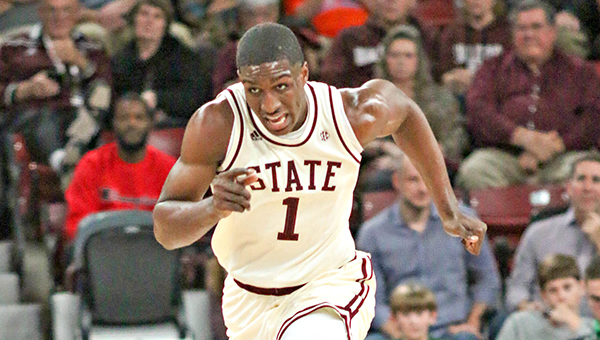 Mississippi State guard Reggie Perry was selected by the Los Angeles Clippers in the second round of the NBA draft on Wednesday, and then traded to the Brooklyn Nets. (Walter Frazier/For The Vicksburg Post)

Robert Woodard II and Reggie Perry both got to fulfill lifelong dreams by having their name called during the NBA draft on Wednesday.

Then, a little while later, they got a second call.

The two Mississippi State players were both selected in the second round of Wednesday’s draft, and then both were traded later in the evening.

Woodard was picked by the Memphis Grizzlies with the 40th overall selection and then traded to Sacramento. Perry was taken with the 57th pick by the Los Angeles Clippers and traded to the Brooklyn Nets for guard Jay Scrubb.

Perry was the only player to rank among the Southeastern Conference’s top 10 in points (17.4), rebounds (10.1), blocks (1.2) and field goal percentage (50.0) last season. He led the conference in rebounding.

It’s the first time since 2003 that Mississippi State has had two players selected in the draft in the same year.

“It definitely feels good to hear my name called,” Perry said. “I was nervous but confident at the same time all throughout the second round. Playing in the NBA has been a dream of mine since I was little. I can’t wait to get to Brooklyn and get to work. I’m on a great team, a championship contending team, with great players. I know a lot of people in the front office, and I feel they have a lot of confidence in me.”

Woodard, a 6-foot-7 guard, more than doubled his scoring average from 5.5 points to 11.4 points per game between his freshman and sophomore seasons. He showcased his versatility as one of only three Power 5 conference players to average over 10 points, six rebounds, one assist, one block and one steal last season.

The Kings sent a 2022 second-round pick to the Grizzlies for Woodard, as well as Michigan State forward Xavier Tillman Sr. The Kings drafted Tillman with the 35th pick before making the trade.

“I truly am excited, it’s a special moment that I’ve waited 21 years for,” Woodard said. “I feel like Sacramento, they took a chance on me, and I’m not going to let them regret it. The Kings are getting a great player with a great work ethic and great character that is going to check all the boxes.”

JACKSON — Brothers, especially twins, are supposed to sacrifice for each other. It becomes even more of an ingrained trait... read more