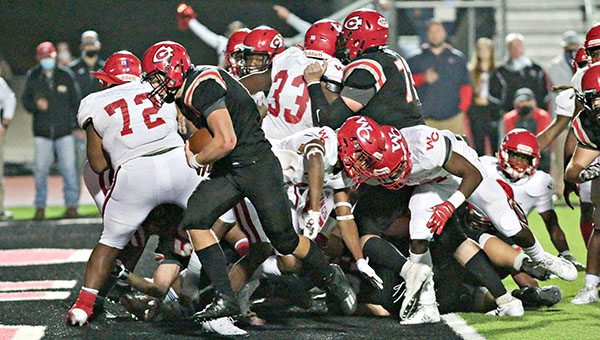 Clinton quarterback Caleb Miller scores the go-ahead touchdown with 1:09 remaining in Friday’s MHSAA Class 6A playoff game against Warren Central. Miller ran for 137 yards and two touchdowns to lead the Arrows to a come-from-behind 18-14 victory. (Walter Frazier/For The Vicksburg Post)

CLINTON — Warren Central and Clinton lined up across from each other with just over a minute left, and dug in. Months of work had come down to this — strength on strength, man on man, one yard separating each side from glory or a punch in the gut. The winner lives to see another day. The loser goes home for the winter.

When the play was over and the dust settled, it was Warren Central that was left doubled over and done.

Clinton quarterback Caleb Miller scored on a 1-yard run on fourth-and-goal with 1:09 remaining, and the Arrows beat Warren Central 18-14 in the second round of the MHSAA Class 6A playoffs Friday night.

Clinton (9-2) won its seventh consecutive game and advanced to face defending Class 6A champion Oxford in the semifinals next week. Oxford beat Hernando 41-26 in another second-round game on Friday.

“It’s so many emotions,” Miller said. “Going from this summer to we didn’t even know if we’d have a season, to being here where we’ve been counted out all season, big game after big game, upset after upset, and still a lot of times we don’t have the respect I feel we deserve. We use that as fuel. We like being the underdog, and we’re going to keep rolling.”

Warren Central (9-3) had its season end, again, agonizingly short of a trip to the deepest rounds of the playoffs. It led Clinton for most of the game, but lost in the second round for the third time in five seasons. All three of those losses have come in the final 70 seconds or overtime.

Although the ending was difficult to stomach, Warren Central coach Josh Morgan said he was proud of his players for a great season.

Miller finished with 137 rushing yards and two touchdowns on 28 carries, and completed 10 of 16 passes for 146 yards and a TD. He either ran the ball himself or passed it on Clinton’s last 25 plays, and on 30 of its 33 offensive snaps in the second half.

The Arrows needed every bit of Miller’s heroics, too, to overcome a Warren Central team showing the form that put it among the state’s elite teams earlier in the season.

WC quarterback Kentrick Thompson threw a 49-yard touchdown pass to Jerry Evans in the first quarter and scored on a 3-yard run in the second to put the Vikings ahead 14-6, while the defense held a Clinton team that had scored 35 points in back-to-back games to six through the first three quarters.

“We couldn’t really get our tempo set on offense,” Morgan said. “We couldn’t stay on the field, we couldn’t extend drives, we had some holding calls. I don’t know if they were holding or not, but those were costly. Drive killers. Those things hurt.”

Warren Central’s sluggish offense opened the door for a Clinton comeback in the second half. Miller fumbled at the goal line at the end of a five-minute drive in the third quarter, but threw a 33-yard touchdown pass to Carsson Deyoung early in the fourth to cut it to 14-12. The two-point conversion try was no good.

On the ensuing kickoff, Warren Central returner Tre Hall caught the ball and slipped down at his own 2-yard line. The Vikings quickly moved the ball across the 25, but a holding penalty on a third-down run by Kentrick Thompson negated a first down and they wound up punting. The punt traveled just eight yards to give Clinton the ball at the WC 32 with 6:07 remaining, and Miller took over from there.

Running the ball seven times and throwing it once, he got the Arrows to the 1-yard line. One attempt to sneak it into the end zone was stuffed by Warren Central’s defense, and put the Arrows into a fourth-and-goal situation with 1:12 to go.

Clinton kicker Price Nixon had a short field goal blocked and missed a PAT early in the game, so coach Judd Boswell elected to go for the touchdown. He called a quarterback run for Miller, who went off the left side for the TD and an 18-14 lead.

Warren Central still had about a minute to work with and one timeout. It converted a third down to get the ball to midfield, but burned a lot of the remaining time doing it. Finally, with four seconds left, Kentrick Thompson heaved a Hail Mary pass into a crowd of players around the 10-yard line and Clinton’s Ja’marea Briscoe intercepted it to end the game.

“We were in a similar spot at this halftime as we were in the regular season,” Miller said, calling back to the Arrows’ 31-16 win over Warren Central in October in which they trailed 10-3 at halftime. “I love this team. We were down in the locker room at halftime and nobody had their head down. We all had confidence in each other, and we all believed we could do it. It wasn’t pretty, but we got it done.”