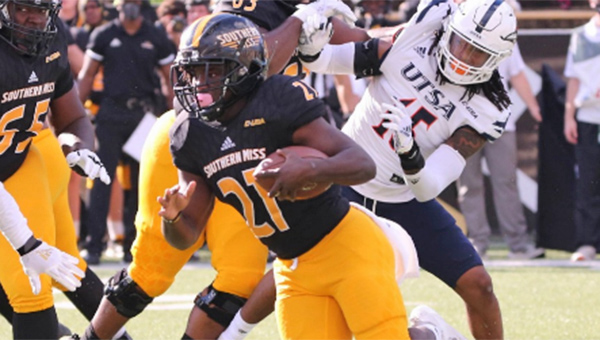 HATTIESBURG (AP) — Southern Miss was a little bit better on Saturday than in many games this season, but it was reminded of the hard lesson that a close loss is still a loss.

Sincere McCormick ran for 173 yards and two touchdowns to lead UTSA to a 23-20 victory over Southern Miss.

“That was really a tough loss. We played hard and defensively we played very well. We gave up one big play and after that drive we lost some momentum,” Southern Miss interim head coach Tim Billings said. “Overall, I thought they played hard offensively. We had some good drives.

The biggest deal is that we left three touchdowns out there. We kicked two field goals where we should have had touchdowns. We were in a position where we needed to get some points. We just couldn’t finish it off and made to many mistakes on both sides of the ball.”

Trailing 10-9 after halftime, McCormick broke loose on a 69-yard touchdown run and scored from the 1 to gave the Roadrunners a 23-10 lead with 6:30 left in the third quarter.

Briggs Bourgeois kicked a 34-yard field goal late in the third quarter and Tate Whatley threw a 51-yard touchdown pass to Frank Gore Jr. for Southern Miss that capped the scoring with 10 minutes to play.

Whatley was 22-of-39 passing for 220 yards with two touchdowns. Tim Jones caught five passes for 65 yards.

Gore had 70 rushing yards to go along with his scoring catch, and finished with 127 total yards.
The Golden Eagles had one more possession after Gore’s touchdown, but after 11 plays they had to punt from their own 39-yard line with 4:07 remaining.

UTSA (6-4, 4-2) converted two third downs on its ensuing possession and ran out the clock with an eight-play drive. All of the plays on the final drive were runs. UTSA finished with 233 rushing yards as a team.

McCormick entered second in the nation in rushing yards and set the program’s single-season rushing record at 1,044 yards with a game remaining. It was McCormick’s eighth career 100-yard rushing game.

UTSA’s Zakhari Franklin caught a 6-yard touchdown pass from Frank Harris in the second quarter. Franklin, a sophomore, finished with 22 yards receiving and has over 1,000 yards for the season. Harris was 12-of-19 passing for only 71 yards, with one touchdown and one interception.

“Overall, defensively we played pretty well. We have no depth and it showed. We have three corners out and some other people hurt,” Billings said. “They did a great job running the ball. I felt our defense did a great job holding a team like this to 23 points. We had a pretty good night giving up only one big play, but it was the killer of the whole game.”