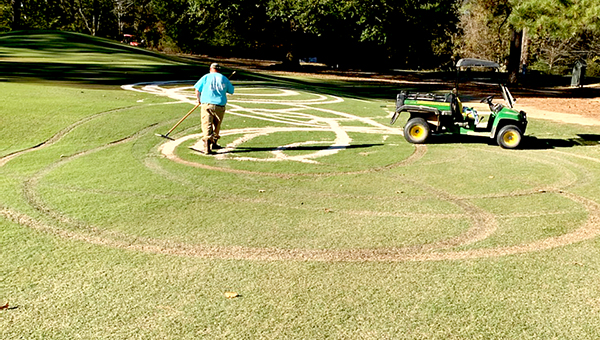 The damage caused by vandals on the Clear Creek Golf Course late Monday will be visible for at least five to six months Clear Creek pro Randy Tupper said Saturday.

When crews arrived early Tuesday to get the county-owned golf course ready for players, they found damage to the green and fairway on hole No. 5 caused by a small car or truck. Tupper said the vehicle “cut donuts” in the turn on the green, fringe and nearly 50 yards of the fairway.

“We are assuming whoever it was used the entrance behind the No. 7 green and then went up to No. 5 and then left the same way,” Tupper said. “Unfortunately, we did not see anything on video.”

What makes the damage worse — given that it was caused to the fairway, fringe and green on the hole — is that it came at a time of the year when the grass is about to go dormant. Tupper said the ruts cut by the tires — which are as deep as half an inch in some locations — will continue to be visible at least through late April or early May.

In the meantime, Tupper said crews have top dressed the ruts, using sand to level them off.

“The sand is just used to level it off so that when the grass does grow, it won’t leave a depression,” he said.

On July 1, vandals broke into the golf course’s maintenance facility and removed six golf carts. Three of those carts were driven into a pond, while three others were damaged to the point where they were no longer operational.

In January 2012, vandals caused similar damage, cutting donuts on the greens near holes No. 13 and 18. At the time, the damage caused to the greens was estimated in excess of $3,000.

Tupper said the department did file a report with the Warren County Sheriff’s Office.

Anyone with information on Monday’s vandalism is asked to contact the Warren County Sheriff’s Office at 601-636-1761.

This feature on Tully Hall and Tully Toys is included in the November/December edition of Vicksburg Living. For information on... read more