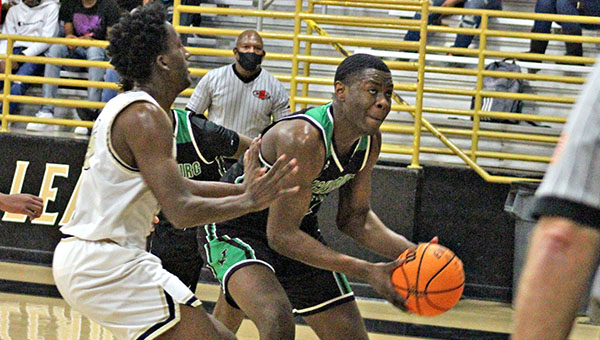 Gators get back on the court, but not into win column

FLOWOOD — After nearly a month off, the Vicksburg Gators tempered some of their expectations for Tuesday’s game against Northwest Rankin.

A win, especially in a tight back-and-forth game like this, sure would have been nice. But a highly competitive game and a chance to shake off a ton of rust was not the worst possible outcome.

Kameron Jones scored a game-high 22 points, Munsumi Lard added 19, and Northwest Rankin gained just enough separation from the Gators in the fourth quarter to squeak out a 73-71 victory.

It was Vicksburg’s first boys’ basketball game since Nov. 5. The team had to quarantine for two weeks because of several positive COVID-19 tests among its players. Four games were canceled during the hiatus, which basically turned Tuesday’s game into the opener of a rebooted season.

The Gators will have a couple of practices to work out some kinks before hosting Warren Central on Saturday.

“They got out of sync. A lot of fouling, some key guys that needed to be out there weren’t able to be out there. Defensively, we’re still stuck in the mud. Coming off that quarantine it’s tough. It’s really tough. We only had one day of practice, so we’ve got to go back to the drawing board and get ready for Saturday,” Carter said. “It’s starting over. But I’m not making any excuses. We still had an opportunity just to win the game and came up short down the stretch.”

Jones hit a 3-pointer midway through the fourth quarter to give Northwest Rankin a 67-60 lead, and a minute later it was 69-61. The eight-point margin was the biggest lead by either team at any point in the game, and it was also short-lived.

Vicksburg answered with a 9-2 run, capped by a three-point play from Kameron Brown with 51.3 seconds left, to get within a point at 71-70, but the Gators missed two chances in the final minute to tie or take the lead.

Keshawn Brown had a game-tying basket waved off when he was called for a charging foul with 20 seconds to go, and Northwest Rankin’s Bannen Singletary split a pair of free throws at the other end to make it 73-70.

With 1.3 seconds to go, Vicksburg’s Malik Franklin went to the line for two free throws. He needed to make the first one, intentionally miss the second, and hope someone could grab the rebound. He missed the first, however, and then made the second. Northwest Rankin inbounded the ball and ran out the clock before the Gators could stop it with another foul.

Taylon Smith led the Gators with 18 points. Keshawn Brown scored 17, and Kameron Brown had 13. The Gators were only 12-for-21 at the free throw line, however, and had a number of turnovers throughout the game. Carter attributed that to the long layoff, and hoped his team could play its way back into shape before the region schedule begins in January.

“When you miss beaucoup free throws and have a lot of turnovers, I guess that is a plus moving forward. But we’ve got a lot of work to do,” Carter said. “We always talk about utilizing games as practice before you get to district, and we’ve got seven or eight where we’ve got to try to fix it. December becomes very, very important. Hopefully by the grace of God this COVID will stay off the Gators for a while and we can continue to work, move forward, and continue practicing and playing games.”

The next game is Saturday against archrival Warren Central. The girls-boys doubleheader will start at noon at Vicksburg Junior High, and attendance will be limited because of COVID-19 restrictions. Carter did not expect that to lessen the intensity of the game.

“It’s still going to be the same atmosphere because it’s Warren Central. If it’s 10 people or 10,000, it’s still Warren Central,” Carter said. “We have to work this week to get better, and hopefully give a better performance on Saturday.”