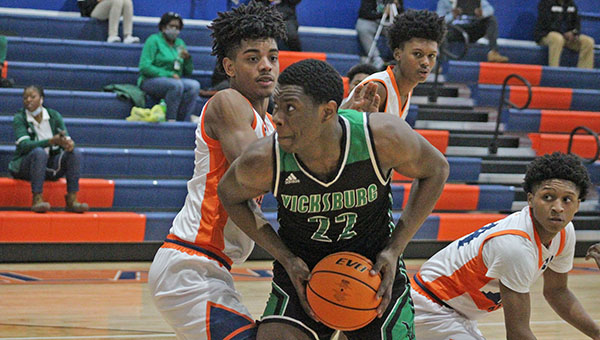 Vicksburg High’s Jaden Williams (22) works in the post during Tuesday’s game against Callaway. Williams had 14 points and 12 rebounds, but the Gators lost 66-62. (Ernest Bowker/The Vicksburg Post)

JACKSON — The Vicksburg Gators didn’t necessarily lose Tuesday’s game against Callaway, so much as they lost the final minute.

Marquise Nichols hit a momentum-shifting 3-pointer to trigger a decisive 8-2 run over the final 60 seconds, and defending MHSAA Class 5A champion Callaway continued to vex the Gators by beating them 66-62.

“You’re going against the No. 1 player in the state and you leave it on the floor and play hard, there’s a lot you can take from this game. If we take this same energy and aggression into Ridgeland, we’ll be 1-1 in district,” Carter said.

The “No. 1 player in the state” that Carter referred to was Callaway’s Daeshun Ruffin. The senior guard and Ole Miss signee finished with 34 points, 27 of which came in the second half. Ruffin went 17-for-19 at the free throw line in the game, and 10-for-10 in the fourth quarter.
Ruffin was the only Callaway player to score in double figures. Trevion Taylor scored nine points and Kevion Hunt had eight.

“Twenty-four took over,” Carter said, referring to Ruffin’s uniform number. “He’s the No. 1 player in the state. He’s a smart ballplayer and he baited us in. We let him get to the rack and help side didn’t show up like it needed to. He’s going to get to the free throw line 10 times a game and shoot 85 or 90 percent. You do the math on that.”

Despite Ruffin’s big game, the Gators threatened to pull off the upset right up until the end. They trailed by two points at halftime, led for much of the third quarter, and were only down 58-57 with a minute remaining.

Nichols’ 3-pointer gave the Chargers a four-point lead, however, and after a Vicksburg miss Ruffin was fouled and sank both free throws to make it 63-57 with 34.9 seconds left.

“That was a big shot,” Carter said of Nichols’ 3-pointer. “It looked like we had a little bit of momentum at one time and then that 3-pointer was kind of like the dagger. It was an opportunity for them to catch the lead and catch their breath a little bit. It made us rush and chase because time is winding down, and you get a three- or four-point lead and it gets tough.”

Jaden Williams scored on the inside to pull the Gators back within four, but Ruffin made two more free throws and Dyllion Redmond made one to give Callaway a 66-59 lead with 4.9 seconds to go. Vicksburg’s Anthony Lumpkin hit a 3-pointer at the buzzer for the final margin.

Williams finished with 14 points and 12 rebounds for Vicksburg, while Taylon Smith scored 14 points and Sean Hardy 10. Keshawn Brown also had a double-double, with 16 points and 11 rebounds.

“Defensive intensity was there for three and a half quarters. We matched their offensive efficiency with defensive efficiency,” Carter said. “I think that’s something we can definitely take away — and there’s a lot we can take away, because not everybody has the No. 1 player in the state. This kid has put up 50 points against the top players in the country, so I thought we did well.”

Tuesday’s game was the first in a busy week for the Gators. They have another Region 4-5A road game Friday night at Ridgeland, and then a quick turnaround to face Warren Central Saturday afternoon at 1:30 p.m.

Saturday’s game will be played at Vicksburg Junior High. Attendance will be limited because of COVID-19 restrictions, and tickets can be purchased online only at gofan.co.

After dropping the region opener and letting a huge upset slip through their fingers, Carter said there’s no question which game was more important.

“I say this every year, but the district games are more important,” Carter said. “The Warren Central game is just a bragging rights thing. I’m not focused on that at all. I’ve got to win against Ridgeland. The real season started today and we’re 0-1. You’ve got to win district games.”

Clinton 78, Warren Central 38
Michael Bell and Kimani Hamilton each made four 3-pointers, and Devin Bass scored 10 points as Clinton beat Warren Central in the Region 4-6A opener for both teams.

Hamilton finished with 16 points and Bell had 14. Clinton made nine 3-pointers in the game, and 13 players scored at least one point.

Del’Jayvien Harried went 14-for-17 from the free throw line and scored a game-high 22 points for Warren Central (2-7, 0-1 Region 4-6A). No other Vikings finished in double figures.

JACKSON — With three games in a five-day span this week, the Vicksburg Missy Gators got exactly what they needed... read more