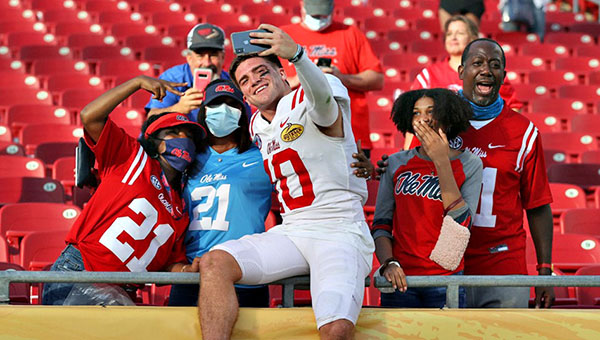 Ole Miss finished with a .500 record, was an afterthought in the Southeastern Conference championship race by mid-October, and lost some of its best players to the NFL.

It hardly seems like the resume of a team on the rise, but try telling them that.

Ole Miss’ 26-20 victory over Indiana in the Outback Bowl was its fourth in five games. Combined with a top-20 recruiting class, new contracts for head coach Lane Kiffin and offensive coordinator Jeff Lebby, and the return of one of the country’s top quarterbacks, the Rebels are already dreaming about big things for next season.

Ole Miss’ dreams of reaching the College Football Playoff ended early this season, with a 1-4 start that included losses to SEC division champions Florida and Alabama.

In truth, however, the Rebels might not have been that far away from a New Year’s Six bowl. In four of their five losses, they were within a touchdown or had the lead in the fourth quarter. Twice, they gave up the go-ahead touchdown in the last two minutes.

The Rebels were in a similar position against Indiana, clinging to a six-point lead with a minute left. This time they got the defensive stop they needed and held on. Kiffin was hopeful that it was a turning point for the program.

“We had been in a lot of these, should have won two for sure where we had the ball in four-minute and then we gave them the ball back and didn’t stop them and had the ball in two-minute,” Kiffin said after the bowl game. “So we were able to do that today on both sides, scored and then stopped them. So it was good to see and hopefully springboards us into doing that in the future.”

The defense’s performance against Indiana garnered the most praise. The 20 points allowed was a season low. Indiana’s 201 passing yards were the second-fewest allowed by the Rebels.

Most importantly, the Rebels closed out the game. After letting a 20-6 lead slip away in the second half, quarterback Matt Corral threw a 3-yard touchdown pass to Dontario Drummond with 4:12 left to put them back in front.

Indiana then got the ball and drove to the Ole Miss 33-yard line. A short pass lost two yards, and then quarterback Jack Tuttle was sacked on second down. Two incompletions after that forced a turnover on downs with 55 seconds to go, and Ole Miss ran out the clock.

“That’s what we’ve been wanting,” said Jones, who finished with 13 tackles. “We knew the game was going to come down to us when the offense scored, so that’s what we wanted, and I feel like that’s what we got.”

On the offensive side, Ole Miss got contributions — and perhaps a glimpse of the future — from a host of unheralded players.

Wide receiver Elijah Moore and tight end Kenny Yeboah, who accounted for nearly half of the team’s receiving yards this season, both opted out of the bowl game to prepare for the NFL draft. Leading rusher Jerrion Ealy did not play because of an injury.

“We talked to those guys in the meeting about these are guys that haven’t played a lot, just like John (Rhys Plumlee) at receiver. All of them want to play more, and now they get a chance to play, and they made plays today, and it was awesome to see,” Kiffin said. “We told these guys, you’re really good players, you just haven’t had an opportunity to play because there were guys in front of you. So it was really good to see guys step up.”

Plumlee might have been the most unlikely hero. He started the season competing with Corral for the starting QB job before losing out and settling in as the backup.

With the receiving corps shorthanded for the bowl game, he switched positions and had a huge impact on the outcome.

Plumlee caught five passes for 73 yards — as many receptions as he had completions while playing quarterback this season. Included in his total was a 44-yard catch and run that set up a touchdown.

“I mean, just the past week, you know, I’ve been praying for opportunities, because as a competitor you want to be on the field, be making plays with your teammates,” Plumlee said. “The opportunity opened up at wide receiver with Kenny and Elijah opting out to go do really big things in the NFL. Just really thankful for the opportunity that opened up, and feel really blessed to have the athletic ability to do it.”

Corral will return for his second sophomore season — players were not charged a year of eligibility in 2020 — as the FBS leader in total offense.

Corral passed for 3,337 yards and 29 touchdowns this season, and ran for 506 yards and four touchdowns for an average of 384.3 total yards per game. He ranked seventh nationally in both passing yards and touchdowns.

Corral brushed aside the talk of any potential individual accolades for 2021, believing it will come down to whether Ole Miss wins or loses as a team.

“You know, it’s a blessing to get the accolades or just to be in that conversation,” Corral said. “But really it’s going to come down to 2021 Ole Miss football dot-dot-dot. Again, and just like this year was 2020 dot-dot-dot, how do you guys want to be remembered, what type of team do you guys want to be known as, and it starts January 18th when we come back and get ready to work.”

Ugly brawl, not winning streak, will be Mississippi State’s last image of 2020

What should have been a positive finish to a difficult football season for Mississippi State quickly devolved into a chaotic... read more