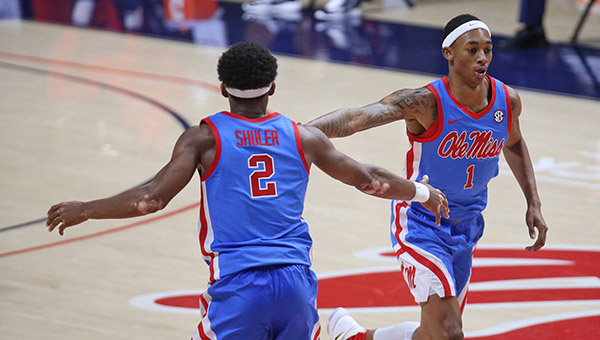 Ole Miss gets back on track by beating Auburn

OXFORD — After one of the nation’s top defenses gave up 80 points in back-to-back games, the Ole Miss Rebels again found their touch to win their first Southeastern Conference game of the season.

Behind 34 points from the bench, the Rebels (6-3, 1-1 SEC) got back on track and found familiar success against Auburn with a 72-61 men’s basketball victory Wednesday.
Ole Miss has now won 13 of the past 17 games over the Tigers.

“You have to give Auburn credit. They are built for coming back,” Ole Miss coach Kermit Davis said. “At times, it was the best we played all year. We moved the ball in transition … we had a happy locker room, and that’s what we needed before we host South Carolina Saturday.”

The Rebels shot 46 percent from the floor and forced 16 turnovers defensively, the ninth time in nine games they have forced more than 15.

Ole Miss also had a whopping 34 points from the bench, led by Khadim Sy’s 13. The senior scored 11 points in the first half with the help of a trio of 3-pointers. The Rebels shot a season-high 85 percent from the free throw line (11 of 13).

Romello White and Luis Rodriguez each added 12 points, while Jarkel Joiner had nine and Austin Crowley had eight.

Crowley led Ole Miss with a career-high 10 rebounds in a game where his team was in control most of the way. Dishing out assists all night was Devontae Shuler, whose career-high 10 were the most by a Rebel in six years.

Auburn was led by Jaylin Williams, who scored a game-high 24 points. He was 7-of-14 from the field, including 6-of-10 from long range.

Sy drilled a 3-pointer to give Ole Miss a 20-16 lead with 11:20 remaining in the first half. The Rebels proceeded to dominate on both ends of the floor with an 11-1 run as the Tigers went seven minutes without a field goal.

KJ Buffen’s and-one basket with the converted free throw bumped the advantage to 11 with just under eight minutes to play in the half. The lead went as high 16, and the Rebels went into the locker room up 43-29 thanks to Sy’s third 3-pointer just before the buzzer.

Coming out of the locker room, the Rebels made four of five shots from the field and opened up their biggest lead of the game at 52-34.

As Ole Miss saw its lead gradually dwindle to just eight with less than five minutes left to play, the Rebels responded with a 7-0 run and a thunderous poster dunk from Rodriguez to go up 15 and keep Auburn from threatening.

“We were up seven against Wichita State, we were up nine against Dayton, and we talked about being a second-half team and closing out, defending and running good offense,” Davis said. “Jarkel did a great job down the stretch making free throws. Just doing what college teams do to finish games.”

Ole Miss finished with a .500 record, was an afterthought in the Southeastern Conference championship race by mid-October, and lost... read more