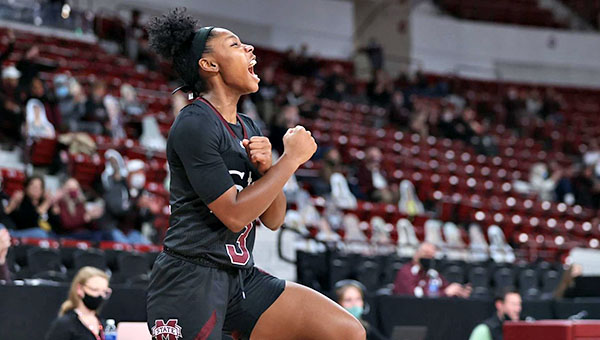 “That is what a rivalry game should look like,” Ole Miss coach Yolett McPhee-McCuin said. “This isn’t a moral victory, but we did come on the road and compete against the No. 14 team in the country. A lot of things just didn’t go our way.”

Coming into the 100th meeting in the series, the Rebels hadn’t won a game in Starkville since 2007, nor defeated the Bulldogs in the last 14 tries.

But Sunday, Donnetta Johnson and Valerie Nesbitt each reached career highs in scoring, Johnson with 25 and Nesbitt 18. The pair did some heavy lifting late, scoring 16 of Ole Miss’ 18 points in the fourth quarter.

A Nesbitt drive sliced what had been a 12-point Mississippi State lead down to 58-56 with a minute left.

Nesbitt stole the ball from Taylor with 29 seconds left, but Johnson’s jumper was just short at five seconds and Ole Miss never got the ball again.

Taylor stamped the win with two free throws with 0.4 seconds on the clock. She added 10 points, eight assists and four steals for Mississippi State (8-2, 3-1 Southeastern Conference).

“When it comes to this game tonight, I told our team it’s an ugly win,” Mississippi State coach Nikki McCray-Penson said. “We didn’t do some things in the second half. You can’t do that against a very talented Ole Miss team. We just really fell apart in the second half. We had open looks. We were tired. The shots weren’t bad, but it was not the shots that we needed at the time. We can’t hang our hats on offense. We have to lock down and defend. When we needed to get a stop, we got a stop. That was very critical for us. I thought our team was locked in down the stretch in making them take the shots that we wanted them to take, then we got the rebound.”

Aliyah Matharu added 16 points off the bench for the the Bulldogs, who shot 38 percent (21-of-55) and scored 18 points off 15 Ole Miss turnovers. The Bulldogs had 14 assists.

Leading 31-27 halftime, the Bulldogs opened up in the third quarter. Matharu sidestepped an onrushing defender and swished a 3-pointer that kicked off Mississippi State’s 16-5 run. The Bulldogs led 50-38 headed into the final quarter.

“Coach McCray always says to start out with an easy shot to get your feel,” Matharu said. “As soon as I came into the game, I got fouled on a layup and got an easy and-one. From there, I found my rhythm and flow and my teammates were finding me wide open for three. I was able to knock down my shots.”

Ole Miss (7-2, 1-2) trailed at the half for first time this season, and the 31 points were the most allowed in a first half.

Ole Miss hosts Mizzou on Thursday. Mississippi State hosts Alabama on Thursday in a showdown of teams 3-1 in the SEC.

NEW ORLEANS (AP) — Drew Brees will get to celebrate his 42nd birthday by preparing for a playoff game that... read more