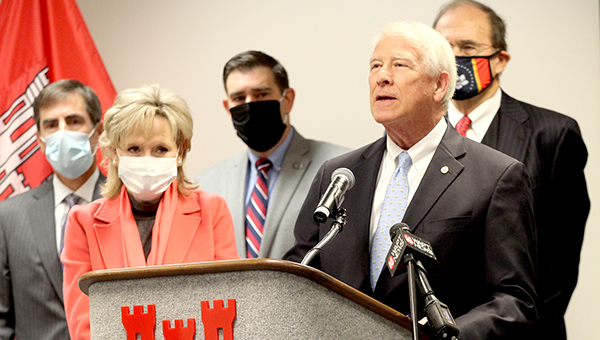 Once the funding becomes available for the Yazoo Backwater Pumps project, it would take about four years to complete the work, the commander of the U.S. Army Corps of Engineers Vicksburg District said Monday.

“When you talk about this particular project, this is one of a kind,” Col. Robert Hilliard said at a press conference held by the Environmental Protection Agency at the Vicksburg District offices Monday to discuss the project.

“These types of large projects are specifically designed. They’re not off the shelf. In realistic terms, you are talking a four-year timeline between the time you get it planned, and then you have to have pumps specifically built from scratch to go into this thing. This does not happen overnight,” he said.

Hilliard said the cost of the project has not been determined.

“The larger project really began with congressional authorization dating back to 1940, so we’re talking about flood control being a major issue for 80 years, now, up and down the Mississippi River,” Reeves said. “With respect to the price tag, I’ll let the engineers figure that out. What I would submit to you is the price of not doing this project is infinitely larger than the price to do the pumps.

“The cost and the price tag not only to our farming industry but to the jobs that go along with it; the price tag to the individuals whose homes were destroyed and have been destroyed time after time and year after year of flooding is such that it is imperative that we continue to process (the plan),” he continued. “This is environmental and economic justice.

“This is a major milestone and one that we should all celebrate and all be prepared for this final push to get it across the finish line.”

The Corps in 2020 submitted a supplemental environmental impact statement proposing to install pumps in the Deer Creek area instead of at the Steele Bayou Control Structure that received the blessing of the EPA.

The EPA ruled in December the proposed project was not subject to its 2008 Final Determination, which vetoed a similar project.

Wheeler said the 2008 plan “was a very narrow plan and it was a very narrow veto that just addressed the aspects of the pumps (at Steele Bayou) and the science model decided that decision.”

Since 2008, he said, the EPA has worked with the Corps and residents in the backwater area to get a better understanding of the project. The Corps, based on improved data, then relocated the pumps to Deer Creek.

“We view it (the revised plan) as a separate project not subject to the veto,” Wheeler said. He said the new plan and the EPA’s approval was the result of meetings, “and all the people working together to address this need.”

The Sunflower River Basin, which includes Deer Creek, is a larger area with better access to potential floodwaters and the location provides access to alternative fuel sources.

“The support for this project is bipartisan and non-partisan,” said Sen. Wicker, a Republican. He acknowledged U.S. Rep. Bennie Thompson and Vicksburg Mayor George Flaggs Jr. — a Democrat and an independent, respectively — for their support of the project.

Wicker said the project will have to get support from the incoming presidential administration of Joe Biden and, “We feel that if we make the case to them about the environmental benefits of this project they will be as supportive as previous administrations.

“This will have to be funded by a new Congress — new House of Representatives and a different looking U.S. Senate,” he said. “We believe we can make that case on a non-partisan, bipartisan basis.”

Wicker said flooding in the South Delta has occurred because of the way the federal government built the backwater project.

“So we are going back with the other half of this project that has been authorized for some time and we haven’t been able to get done,” he said. “This balances sound conservation and flood protection; it is based on sound science.”

“The Corps has worked extensively on this project,” said Sen. Hyde-Smith. “It is abundantly clear that only good will come from this project. This will help the environment.”

Recalling the history and the relationship between the South Delta and the Eagle Lake community, Lt. Gov. Hosemann said the pumps project is a meeting between the environment and the people of Mississippi.

Photo gallery: Residents get out and enjoy snow’s rare visit

These photos were shared with The Vicksburg Post from readers who got out and about to enjoy a rare snowstorm.... read more