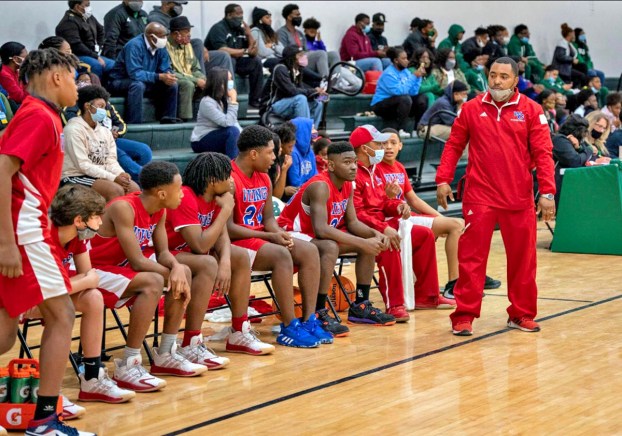 Warren Central Junior High players sit on the bench during a game earlier this season. The Vikings reached the championship game of the Little Six Tournament, where they lost 50-31 to Germantown on Saturday. (Submitted to The Vicksburg Post)

Warren Central Junior High’s boys’ basketball team entered the Little Six Tournament with a .500 record and not much more than a dream of winning the championship.

They did not have a fairytale finish, but they sure did come close.

The Vikings won three games at the Little Six junior high tournament this week, including a buzzer-beater over No. 1 seed and archrival Vicksburg in the semifinals, before running out of steam and losing 50-31 to Germantown in the championship game on Saturday.

“I’m very proud of my guys. We just fell a little short,” Warren Central coach Charles Swartz said. “I always felt real good about my team. We started off slow and got them to believe in the process and what we were trying to do. No one really expected us to do anything, and to be where we were was great.”

Warren Central finished the regular season with a 6-6 record, but won its first two games in the tournament before facing Vicksburg in the semifinals on Thursday. A putback basket by Anias Thompson as time expired gave the Vikings a 46-44 victory and sent them on to the championship game.

The Vikings started slow against Germantown, however. A free throw by Chance Ward was their only point of the first quarter, and they trailed 27-11 at halftime. Germantown was able to keep them at bay in the second half and cruise to the victory.

Jaylen Winters, Warren Central’s leading scorer this season at about 15 points per game, made five 3-pointers and scored 24 in the championship game.

Winters was one of many contributors to the Vikings’ postseason run. Thompson, Maddox Lynch and point guard Roosevelt Harris were all two-year starters who Swartz said helped the team turn a corner as the season went along.

“We really didn’t do too well the year before, but I had a young team. With them coming back, I thought we had a chance to improve,” Swartz said. “As the season went on, I saw those guys coming on and becoming a family. I think it’s good for Warren Central basketball as a whole going forward.”

The corps of the junior high team will move up to ninth grade next season, but Swartz said he doesn’t think we’ve heard the last of them.

“I fully expect, if these guys can stay together, they can make a run as ninth-graders,” Swartz said. “It’s a good group of kids, and a good group of parents. Everything lined up for us.”

In the final moments of Friday’s game against Madison Central, Tony King shook free from the defense and unleashed a... read more