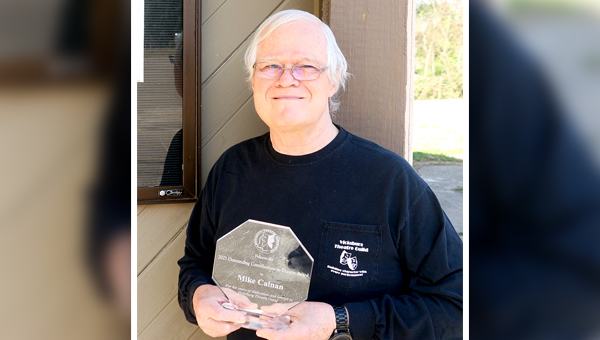 Mike Calnan has been involved with the Vicksburg Theatre Guild for 20 years.

He is also a member of the Mississippi Theatre Association, so when the president of the organization emailed him about participating in a Zoom meeting he logged in.

Calnan had been told the meeting would be dealing with online production programming, but to his surprise, it was to let him know he had been named the recipient of the Mississippi Theater Association’s award for Outstanding Contribution to a Community Theatre.

“I was totally shocked,” Calnan said. “It started off with Sarah (Goss, a VTG member and part of the Zoom meeting) reading the citation for the award and when it got about 20 seconds in, I said, ‘This isn’t about online programming is it.’”

During his two decades of service to the Vicksburg Theatre Guild, Goss said, “Mike is really what makes the theater work. We joke about it all of the time, but it’s true. He is not one that has a desire to be on stage. He will fill in for a small role if needed, but Mike’s passion is administration. And, he is outstanding at it.”

Calnan has served as the Guild’s president and is currently serving as its secretary.

“He also makes all programs, prints off all bios, and just keeps on top of all things administrative for the daily operations of our theater,” Goss said. “Often we get caught up in the big names, the directors, the actors, the musicians and forget that it would be almost impossible to pull together a successful (theater) run without the behind the scenes folks. Bills must be paid. Deposits must be done. Lighting has to be run. Sound systems have to be operated and maintained.

“Mike is more than willing to step up and help with all of those things.”

The award is typically presented during the MTA’s annual festival, but due to COVID-19, the presentation this year was done virtually.

Calnan said he became involved with the VTG when his daughter, Heather, began performing in the Fairy Tale Theatre productions, which are held in the summer for children.

His family has also been part of the cast for past productions of “Gold in the Hills.”

“Mike works hard to foster a love for theater in the community and his own family. He is extremely positive and supportive of all who participate in any way,” Goss said. “Anyone who has ever directed or produced a show knows how invaluable an extremely competent and meticulous administrative person is. Mike makes everything we do better.”

The MTA seeks to recognize those theatres and individuals that represent exemplary service to the organization and to theatre in Mississippi. It’s composed of six divisions targeting distinct groups. Each division sponsors festivals, workshops, and retreats; recognizes excellence in performance and production; advises theatre leaders and educators; shares information on upcoming productions; and advocates to government agencies, businesses and the public.

Roberts: Making Mississippi a healthier place one meal at a time

Cooking has been a part of Kevin Roberts’ life since he was 5 years old, but until he was 26,... read more