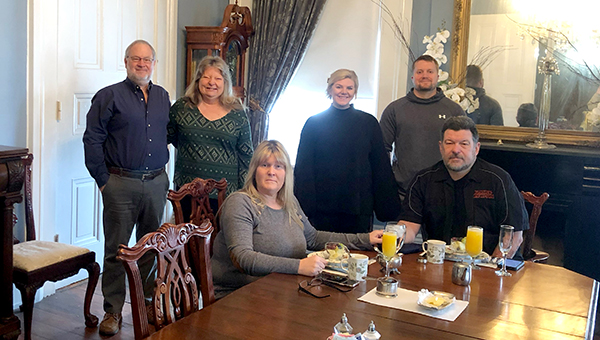 Three couples find being stranded at Duff Green not too bad

For the better part of two days, roads in Vicksburg and Warren County have been nearly impassable. Residents have been urged to shelter in place as ice and snow make even the shortest trips treacherous, and temperatures that are still below freezing promise to keep it that way a while longer.

But for some visitors who came to the River City before the wintry mix set in, staying put hasn’t been so bad. A number of guests at Duff Green Mansion who were stranded by the weather have made themselves at home while trying to make the best of an unexpectedly extended trip.

“If you are going to get stranded somewhere, this is the place — in this beautiful home and with such a wonderful host and hostess,” Margaret Westervelt said.

Margaret, along with her husband, Ted, booked a room at the iconic Vicksburg bed and breakfast on their way back home to Mauldin, S.C. Margaret said they had been in Longview, Texas, visiting their son, daughter-in-law and grandchild.

The couple was one of three who were having an extended stay at Duff Green.

Brett and Sherry Haas traveled about 600 miles from Carlyle, Ill., for a visit to the Duff Green Mansion.

“My wife surprised me for Valentine’s Day and brought us down here to Duff Green for the paranormal experience and for our first Valentine’s together,” Brett said. “We just got married Oct. 10.”

And with another surprise — the weather — keeping them from returning when they had planned, Brett said he and his wife are enjoying their extended stay.

“We are being kept in very good hands and taken exceptionally good care of,” Brett said.

Vicksburgers are not as adept at handling the cold weather patterns as someone who hails from up north. But even Brett said it was colder than normal in his hometown. He said he  talked to his son on Monday and temperatures in Carlyle were 10 to 15 degrees below zero with the wind chill, and between 8 and 12 inches of snow had fallen.

“We would much rather be here,” Haas laughed.

McKensie Holliman and her boyfriend Wayne Smith, who were staying at the mansion, had flown in from Philadelphia to visit family.

Holliman, who is originally from Jackson, said her mother had moved to Vicksburg and  she and Smith came to town for her mother to meet Smith.

But with bad weather across the country, their return flight to Pennsylvania was one of thousands canceled nationwide.

“So now we are stuck here until Friday,” Holliman said.

But like the Westervelts and Haases, Duff Green has been a nice place to be if you are “stuck.”

As a bed and breakfast, Caldwell is prepared to serve breakfast, but with guests having to shelter in place, she had to get creative.

“You can’t give them bacon and eggs three meals a day and I was worried about what I was going to feed them,” Caldwell said. “But fortunately between William Furlong and Marilyn Winkey, they were able to come up with enough food to get us through two days.”

“They are serving us good food and we are enjoying it,” Ted said.

As far as entertainment, Caldwell said, she was letting her guests take care of themselves.

“They have talked and visited with each other and gotten to know each other,” Caldwell said.

Brett said he and Sherry have also been laying in bed and watching TV while keeping up with family back home.

Holliman said she and Smith have been working remotely, and the Westervelts have been listening to a book on tape.

“We always get a book on tape when we travel and we have been kind of boring because we have been up in our room listening to John Grisham’s ‘A Time For Mercy,’ and we have an hour and a half left,” Margaret Westervelt said.

Although the weather has delayed plans for all three couples to return home, their extended stay at Duff Green will remain a good memory.

“It’s just been wonderful,” Margaret said. “They have taken such care of us and there has been wonderful food. We have just thoroughly enjoyed it.”

The lingering ice and snow, combined with cold temperatures, has forced some local churches to suspend, postpone or modify their... read more