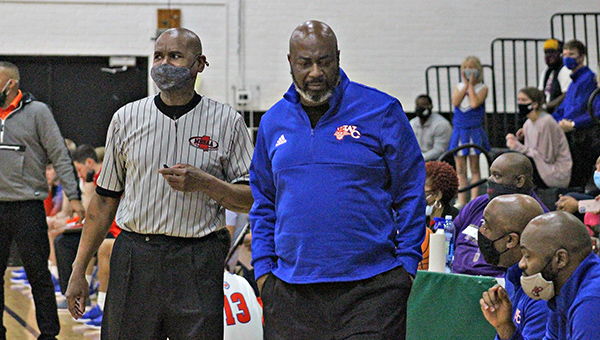 Warren Central boys’ basketball coach Bruce Robinson walks along the sideline during a game earlier this season. Robinson’s Vikings will play Olive Branch in the first round of the MHSAA Class 6A playoffs Sunday at 3 p.m. (Ernest Bowker/The Vicksburg Post)

Another day, another delay.

For the third time this week the Mississippi High School Activities Association on Wednesday announced it will postpone the start of its high school state basketball tournaments because of icy weather and dangerous travel conditions across the state.

The ruling means Warren Central’s boys team, as well as Vicksburg High’s boys and girls teams, have had their playoff openers pushed back yet again. In all, the state tournament has been delayed a week because of the wave of winter weather washing over Mississippi.

The MHSAA is allowing teams that are less affected by the weather to play this weekend if possible, while also allowing those in the harder-hit northern half of the state to play early next week.

“This may not be an ideal situation, but this is not an ideal year,” MHSAA executive director Rickey Neaves said in a statement announcing the decision.

The latest adjustments for Warren County’s teams are as follows:

In addition to the changes to the basketball schedule, the Warren Central Softball Classic tournament set for Saturday at Sports Force Parks has been canceled.