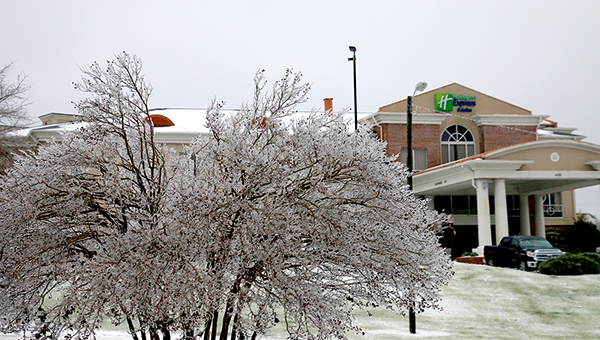 A mix of stranded travelers, utility workers and local residents are filling up Vicksburg’s hotels during the huge winter storm of 2021, but it’s hardly been a comfortable vacation.

Lynn Foley, executive director of sales for Southern Hospitality Services, said her company’s three hotels are struggling with many of the same issues plaguing the rest of the city after a weeklong icy siege, such as a lack of water and dwindling food supplies.

Foley’s company owns the Courtyard by Marriott, the Holiday Inn Express, and the Comfort Suites, all located just off of East Clay Street near the former Outlets of Vicksburg. All three properties had power, but no water. The city’s water plant lost pressure Wednesday night, resulting in low pressure throughout Vicksburg, and water main breaks caused by days of freezing temperatures compounded the problem.

“Water issues are a problem with having clean linen for the rooms,” Foley said. “We’re doing the best we can to accommodate people with food and beverage, but we’re having our own issues with supplies coming in. We have staff staying in the hotels and are pleased they were willing to do that.”

Foley said there were some rooms available at all three hotels — and more bookings flooding in — but a mix of diverse clientele have left them in short supply. Some are tourists who were stranded by the weather and extended their stays, while others are locals who were frozen out of their own homes.

Icy roads are making it impossible for some essential workers to get to — or home from — work. But... read more