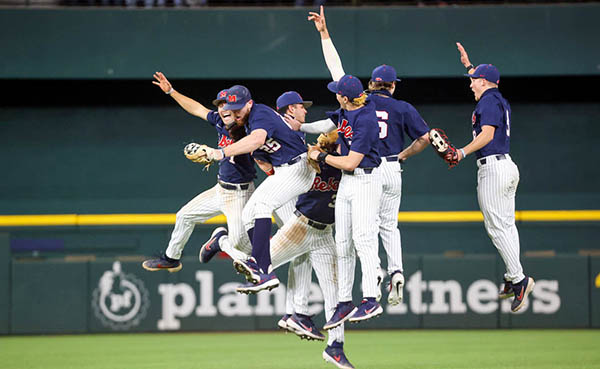 Ole Miss baseball players celebrate after beating Texas Tech 5-4 on Sunday. Ole Miss won all three of its games at the State Farm College Baseball Showdown in Arlington, Texas, over the weekend, and were rewarded with a No. 1 ranking in both the Baseball America and D1Baseball polls. (Joshua McCoy/Ole Miss Athletics) Twitter and Instagram: @OleMissPix Buy Photos at RebelWallArt.com

Ole Miss messed with Texas and came out on top.

The Rebels beat No. 18 Texas 8-1 on Monday in the final game of the State Farm College Baseball Showdown. It completed a three-game sweep of top-25 opponents from the Lone Star State, a showing that vaulted them to a No. 1 national ranking for the first time in the program’s history.

Ole Miss is No. 1 in Baseball America’s latest national rankings, released Monday, and D1Baseball released Tuesday. Ole Miss jumped to the top spot from No. 4 and No. 6 in the two polls, respectively, after former No. 1 Florida and No. 2 UCLA both suffered losses on opening weekend.

Monday’s win over Texas was the Rebels’ 19th in a row, dating back to the second game of the 2020 season. They’ll play Arkansas State in the home opener at Swayze Field Wednesday at 4 p.m.

Peyton Chatagnier put together another outstanding offensive performance, going 3-for-4 and scoring two runs, while Trey LaFleur went 2-for-4 with a solo home run. Jacob Gonzalez and Kevin Graham each finished with two runs apiece.

Chatagnier went 5-for-11 with four doubles, three RBIs and three runs scored in three games over the weekend.

Chatagnier doubled and scored on a single by Graham to spark a four-run rally in the sixth inning. Justin Bench drove in two runs with a single as well.

LaFleur’s solo home run and an RBI triple by Gonzalez were the key hits in a three-run ninth inning for the Rebels.

Derek Diamond allowed one run and struck out eight in six innings to earn the win.

Rowdey Jordan went 2-for-5 with a triple and three RBIs, while Josh Hatcher had two hits and scored twice for the Bulldogs.

Koestler, a seventh-year senior, was the third of five pitchers used by Mississippi State and was credited with the win. He allowed one run on two hits and two walks in his first appearance of the season.

Coincidentally, Koestler’s last appearance was also against Texas Tech. He started the final game of the 2020 season that was shortened by the onset of the COVID-19 pandemic.

“We were down a bunch of arms this weekend, and that is the year we are going to have, and we have told our guys to embrace it and it is a next man up mentality,” Mississippi State coach Chris Lemonis said. “I give our guys a lot of credit and I like the way we played. We didn’t play perfect, and we have a lot of room to improve, but we played tough. Our guys stay engaged, they play tough and that is what I like about them.”

The Golden Eagles won two of their three games in the season-opening series as their pitching staff collected 45 strikeouts and allowed just four walks.

Starter Drew Boyd limited the Demons (1-2) to two hits and posted a career-high nine strikeouts with no walks to earn his first victory. Matt Adams pitched the final two innings, and posted three strikeouts and one walk.

Eleven months and nine days after their last baseball game, the St. Aloysius Flashes returned to the field and walked... read more