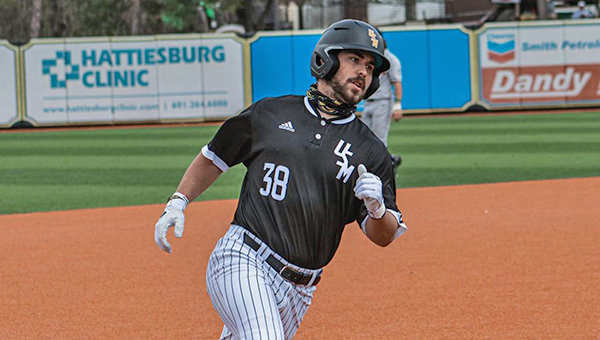 HATTIESBURG — Southern Miss, it seems, used up all of its late-inning magic in the first two games of its series with Connecticut.

Southern Miss erased nearly all of a seven-run deficit, but Connecticut scored three runs in the top of eighth inning and held on for a 10-7 victory in the series finale Sunday at Pete Taylor Park.

Reggie Crawford had three hits, including a pair of home runs and six RBIs, for UConn (2-4).

Southern Miss (4-3) had taken one-run victories in each of the first two games of the series, and threatened to steal the sweep on Sunday with a late comeback.

Three home runs — solo shots by Dustin Dickerson and Charlie Fischer, and a two-run blast by Reece Ewing — and a sacrifice fly by Dickerson chopped a 7-0 deficit to 7-5 in the seventh inning.

Connecticut answered with three runs in the eighth, however, with two coming across on a single by Erik Stock.

Southern Miss got two unearned runs back in the bottom of the eighth to make it 10-7 and then stalled there. UConn reliever Caleb Wurster got out of the jam without further damage and then worked around a walk and a hit batter in the ninth inning to close it out.

UConn starter Austin Peterson allowed one run on two hits, and struck out eight in six innings to earn his first win of the season.

Southern Miss returns to action at 6 p.m. Tuesday when they travel to Pearl to face in-state rival Mississippi State.

Lane Gordon didn’t have any competition at the MHSAA Region 2-6A powerlifitng meet on Saturday, in both a literal and... read more