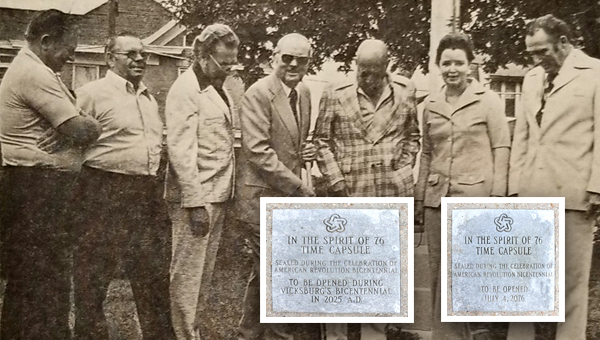 During a bicentennial celebration in July 1976, public officials buried two capsules next to the Warren County Courthouse. One capsule is set to be opened in July 2025, while the other will be opened July 2076.

Profile 2021: Just a few more years for this one time capsule

It was 1976; the year the United States celebrated its bicentennial.

People from across the country were gearing up for what was to be one of the most memorable Fourth of Julys.

The city of Vicksburg was also making plans for the holiday. A fireworks display was scheduled, an opera singer and a band were to perform and dignitaries, including Attorney Gen. A. F. Summer, were to speak.

But the main event of the celebration was to be the burial of a pair of time capsules on the Warren County Courthouse lawn.

The Vicksburg Evening Post called this the “Bicentennial spectacle,” and a few days before the burial the Warren County Board of Supervisors posed for a groundbreaking photo.

Holding memorabilia for future generations to open 50 and 100 years later, holes for the capsules were dug 48 inches long, 30 inches wide and 22 inches deep. The actual capsules themselves were made of plastic pipe 8 ½ inches in diameter and 2 feet long. The capsules were then encased in concrete and buried on the north and south side of the flagpole and capped with marble slabs.

Although the capsule to be opened on the Tercentennial of the U.S. is still 56 years away, time is ticking down for the 2025 time capsule.

In just four years, it will be opened during the celebration of Vicksburg’s Bicentennial.

With all the hype and hoopla that was given surrounding the time capsules nearly 50 years ago, the mention of what was preserved was not revealed.

Those who posed in the photo for the groundbreaking are long gone, and with only a handful of people even slightly recalling the “Bicentennial spectacle,” one can only guess as to what will be dug up.

It has been rumored that a picture of the current Warren County Sheriff Martin Pace was included in the capsule.

John Bullard, who is the son of the late Nat Bullard, Vicksburg’s mayor at the time, said he remembers Pace telling him there was a picture of him in the capsule — one when the law enforcement officer had “long red hair.”

“I did have long hair and rode a motorcycle,” Pace said.

At 17 years old, when the capsules were buried, Pace said he could not recall what exactly was put into the capsule.

So since the contents of the time capsule will remain a secret until July 4, 2025, it merely becomes a guessing game in trying to figure out what was deemed worthy to look back on.

Packing in a picture of a long-haired teen who would eventually become the top law enforcement officer of the county would certainly be a fine example of how things have changed in the last 50 years.

PATTISON — Four men are being held in the Claiborne County Jail without bond and authorities have issued a warrant... read more