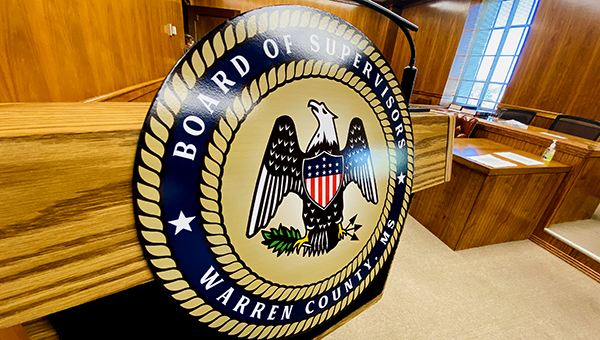 The Warren County Board of Supervisors voted to approve consideration to provide a right of way and easement to the city of Vicksburg in support of an economic development project related to Vicksburg Forest Products on Haining Road.

The easement, located on 1.5 acres of county-owned land north of Vicksburg Forest Products, would allow the construction of a levee to be built at the intersection of Haining Road and the centerline of Long Lake Road, said Pablo Diaz, president and CEO of the Vicksburg Warren Economic Development Partnership.

“But when the engineers (for the project) started talking to the Corps of Engineers and looking at the environmental and wetland items, it became evident that it would be better going in a different direction, which is taking from the northwest corner of the existing levee of Vicksburg Forest Products and go in a straight line to join the levee at Haining Road,” he said.

The parcel of land is not utilized because of flooding. The city of Vicksburg’s main waterline runs under the property.

A valve on the line broke during the 2017 flood, forcing the city to shut off water service for three days while contractors built a levee around the leak and then removed the water on the levee to reach the line and make repairs.

“In 2017, when the water main broke, this is where it broke and because it was unprotected it was flooding and the city had to spend money to build a quick levee and pump water out and fix the issue,” Diaz said, which is why building a levee could protect the city in case of another water break.

“Two things that could come from the easement. It allows the expansion (of Vicksburg Forest Products) to happen and it helps the city as well,” Diaz said.

Profile 2021: Just a few more years for this one time capsule

It was 1976; the year the United States celebrated its bicentennial. People from across the country were gearing up for... read more