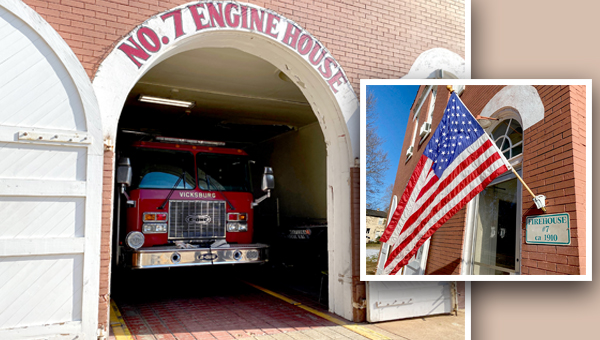 The No. 7 Fire Station in Vicksburg was built in 1910, and now, 111 years later, is still in use as the oldest functioning fire station in the state.

The world has undergone an immense amount of change since then, but the station has remained the same.

A modern fire truck now rests on bricks that were once designed for a horse and carriage.

The bricks were laid in such a way that would create traction and keep the horses from sliding on slick ground. There was even a room built with a slanted floor to drain fire hoses. The room remains today, but it is used for storage.

The department has not completely rid the firehouse of the 1910 feel. Several years ago they had an original horse-drawn carriage used as a fire vehicle refurbished, and it sits in the station today.

With each day it ages, the building presents new challenges for Vicksburg’s current firefighters. Technology changes, and fire trucks get bigger, but maintenance issues never cease.

“It’s a historic building. We are limited on what we can do to it, so for the modern needs of the fire service, we’re basically a historically obsolete building, and we’re not able to adapt the building to the current needs,” Danczyk said. “This station was built in 1910. They did not know we would be here today.”

Former Fire Chief Kevin Westbrook spoke of the difference in duties of the staff for different time periods.

The only truck in their fleet they can fit in this small space is a 2001 model. It sits 4 to 6 inches away from the door on each side.

The truck they used before this one sat a mere 2 inches from the door on each side, Westbrook said. The door has a few scratches, but for the most part they never hit it.

“It’s about repetition. You get used to it,” Lt. Tavares Hatchett said.

Hatchett drives the truck often, but the first time, he said, was tricky.

The station still looks very similar to how it looked the day it was built. Since it is a historical landmark, they are unable to change it, and Station 7 firefighters try to maintain its history.

For years, the station used modern garage doors where the originals used to be. When those broke down, Westbrook decided to bring out the building’s character and recreate its original doors. He used an old picture to do so.

Lt. Derrick Holt enjoys working out of Station 7, and he knows the area like the back of his hand.

“I wouldn’t trade it for another station,” Holt said. “I come to work ready every day.”

Anna Kate Doiron is a 2017 graduate of St. Aloysius and is a senior at the University of Mississippi majoring in integrated marketing and communications. Anna Kate has worked as a reporter for The Vicksburg Post between the fall and spring semesters. She is also the founder, and lead baker, for Macarons by AK.

Alligators are found all over the Southeastern United States. Florida and Louisiana have the most, and they can be found... read more