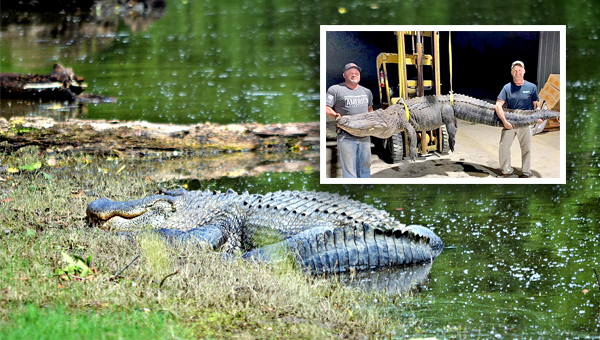 Kent Wilburn and Bradley Baugh show off a large alligator they caught during the 2020 Mississippi alligator hunting season. (Photo courtesy of Mississippi Department of Wildlife, Fisheries and Parks)

Alligators are found all over the Southeastern United States. Florida and Louisiana have the most, and they can be found as far north as Virginia and as far west as Texas.

Some of the biggest and baddest in the country, however, live in Mississippi — and the Warren County area in particular. The rich soils of the South Delta and stagnant bayous and backwaters along the Mississippi River create a fertile feeding ground that leads to large numbers of enormous gators.

Since the Mississippi Department of Wildlife, Fisheries and Parks first allowed alligator hunting in 2005, six of the state’s 10 biggest catches have occurred in the waters of Warren and Issaquena counties. Before the current record holders were hauled in, other gators caught in the area have held records.

The longest (10 feet) and heaviest (319 pounds) female alligators ever caught in public waters were caught in Steele Bayou and Eagle Lake. The biggest male (14 feet, ¼ inch and 826 pounds) and female (10 ½ feet, and 283 pounds) gators caught on private lands are also from the area.

“A new record is subject to be found almost anywhere in the state, however, the odds are it will most likely come from an area adjacent to the Mississippi River, its tributaries, or within the Delta,” said Ricky Flynt, the MDWFP’s Alligator Program Coordinator.

Flynt said the reason behind Warren County’s enormous gators is simple — they’re at the top of the South Delta’s very large and diverse food chain. Nutrients from the Mississippi River produce plenty of plants, which allows all of the area’s wildlife to thrive and creates a bountiful buffet for hungry gators with few natural predators.

“Alligators stand at the top of the food chain as apex predators and so the alligators in the Delta region exhibit above-average sizes and growth rates than alligators outside of the Delta Region,” Flynt said.

Even an invasive species like the Asian Carp, which has negative impacts on other fish species all over the Mississippi River basin, have become a food source for alligators.

“These carp populations exist in amazing numbers and are extremely easy for alligators to prey upon. It is my theory that it has actually increased the growth rates of alligators in areas where Asian carp exist simply by their availability,” Flynt said.

As evidence of just how fast alligators can grow in this area, Flynt pointed to a gator named “White 101.” It was one of 800 alligators that the MDWFP tagged and monitored over the years, and was 5 feet, 7 inches long when it was first found near Halpino Lake in Warren County in June 2011.

“That is considered exceptional growth for an alligator in its adult years,” Flynt said.

While the presence of large gators in and around Warren County might keep some people away, it is a boon to the state’s hunters. The MDWFP’s alligator season lasts two or three weeks each September. A limited number of permits are issued each year, and Flynt said there is no doubt which zone is the most popular.

“Of the seven available hunting zones, the West Central and the Southwest Zones, and the Pearl River/Ross Barnett Zone are among the three most sought after hunting zones,” Flynt said.

Sandlot owners put focus on the development of young players

Starting a new business is exciting. Knowing it will offer the community an opportunity at something that Vicksburg has never... read more