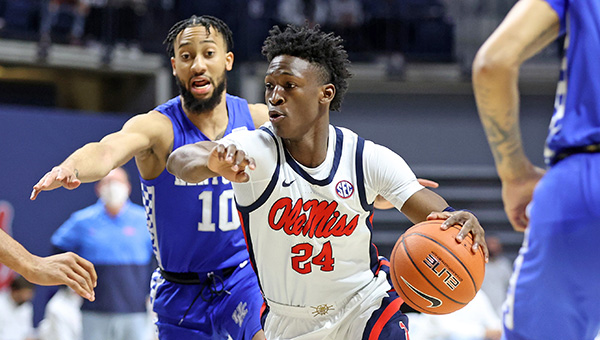 Rebels hoping win over Kentucky is the start of something bigger

OXFORD — After two devastating losses likely knocked it off the bubble for the NCAA men’s basketball tournament, Ole Miss’ path to the Big Dance lies in winning the Southeastern Conference Tournament next week in Nashville.

Tuesday’s performance against Kentucky was a good — and important — first step toward that.

Devontae Shuler scored 17 points, K.J. Buffen had 16 points and 10 rebounds, and Ole Miss beat Kentucky for the first time in a decade, 70-62. The Rebels (14-10, 9-8 Southeastern Conference) snapped an 11-game losing streak in the series.

“I thought it was a real physical game. I’m proud of our team,” Ole Miss head coach Kermit Davis said. “Rebounding was a key, especially against a team like Cal’s (John Calipari) team. Devontae Shuler had one of his best games he’s ever had an Ole Miss Rebel.”

Ole Miss’ NCAA Tournament hopes took a huge hit with losses to Mississippi State and Vanderbilt in a three-game span in late February.

With one game left in the regular season — Ole Miss hosts Vanderbilt on Saturday — there are still plenty of scenarios in play to determine who gets what seed in the 14-team SEC Tournament. Ole Miss appears most likely to be the No. 6 seed, but could still wind up fifth or seventh.

“We’re playing for fifth and there are a lot of good teams behind us, so we are playing for a lot,” Davis said. “We may not be the bubble team we were a week ago, but there are postseason implications with every single game. The biggest thing is to try and get your team playing well going into the conference tournament.”

Davis added that another thing working in the Rebels’ favor is the overall inconsistency of the SEC this season. Eight teams entered the final week of the regular season within three games of each other, and only six have winning records in conference play.

Davis said the inconsistency was “frustrating,” but that it could work in favor of a team that gets hot at the right time — maybe even his own.

“We’ve got three top 25 wins, two top 10s, we beat Kentucky even if it might not be the normal Kentucky team, and we’ve been competitive in a lot of other games. I think our team is one of seven or eight that can do that,” Davis said. “Some things have to fall your way. No question about it, there are some teams in this league that can win three or four games.

“We may get a draw that you can beat a couple of ranked teams in the tournament, and then you never know what may happen.”

The Rebels also went 16-for-19 from the free throw line (84.2 percent), a stat that proved crucial down the stretch after a back-and-forth affair.

“How about we have 16 assists and seven turnovers? What’s that usually mean for us?” Kentucky coach John Calipari said. “Yeah, (a win). Not when you get outrebounded.”

Four Kentucky players reached double figures, with Keion Brooks Jr. tallying a team-high 16 points off the bench, but it wasn’t enough to keep the Wildcats from earning an unwanted place in the program’s storied history.

Kentucky will play on Thursday in the SEC Tournament for the first time since 2008, and also clinched its first losing season in the SEC since the 1988-89 season. Kentucky finishes the regular season Saturday at home against South Carolina.

Kentucky started the season ranked No. 10 in the country, but will need to win the SEC Tournament and the league’s automatic berth to reach the NCAA Tournament.

Kentucky has won the SEC Tournament 29 times, but has not done it by winning four games since 1952.

“It’s winding down,” Calipari said of the big picture of the season. “We’re up against it now.”

The Wildcats had won three in a row before losing the last two.

“We were right on the edge of pushing over the edge to go the right way and be right there and do some crazy stuff and then they revert back to what is easier and what they’d rather do,” Calipari said. “Normally my teams understand, ‘OK, I’ve got it, I see what he’s saying, I’m hearing him now and this is the way I play.’ And then they go on from here and they’ve learned how to fight, how to make it personal with another player. ‘It’s you and me’. And they learn all that here.

Early lead slips away from Missy Gators in loss to Clinton

Vicksburg High’s softball team learned the dark side of the old saying, “It’s not how you start, but how you... read more