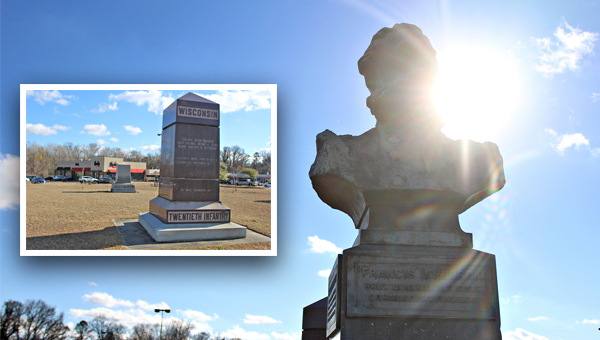 A Civil War monument located at Pemberton Plaza is seen recently, as traffic flows along Pemberton Square Boulevard. The cluster of monuments are among many in Vicksburg located outside the current boundaries of the Vicksburg National Military Park. (Ernest Bowker/The Vicksburg Post)

Profile 2021: Shifting lines leave monuments out of the park

For Civil War buffs visiting Vicksburg, the Vicksburg National Military Park is an obvious main attraction and the epicenter of the trip. For the more adventurous and eagle-eyed historians, however, there is a scavenger hunt of history scattered all over town.

A total of 145 monuments, ranging from humble unit markers to larger state monuments, are located outside the boundaries of the VNMP but within the city limits.

The monuments can seem oddly placed. One collection is in front of a strip mall on Pemberton Square Boulevard. Another is on the side of a downtown building, and still more are located along roads or even in the woods. How they wound up there is a story unto itself, much like how the various Union and Confederate soldiers memorialized on them found their way to Vicksburg nearly 160 years ago.

The VNMP was established in 1899, and its boundaries generally followed the lines of the two armies. In 1963, however, Congress passed an act exchanging a total of 178 acres of park land with the city of Vicksburg and Warren County.

Most of the monuments that were on the exchanged land were moved within the new park boundaries, but a number of others were left where they were originally placed, according to Brendan Wilson, the VNMP’s Chief of Interpretation, education and Partnerships.

“The original configuration of Vicksburg National Military Park was much different than it is today,” Wilson said. “The original road layouts changed, especially when Interstate 20 was constructed in 1957. With the land exchange in 1963, many of the monuments are now located on city, county, or private property.”

Among the more notable monuments now outside the park boundaries are state monuments for North Carolina, Florida, Maryland, South Carolina and Virginia that are located along the stretch of Confederate Avenue between Halls Ferry Road and Iowa Boulevard.

“Some of the markers that indicate the location of the river batteries were always outside of park boundaries. For example, the river battery marker on Levee Street near the Jesse Brent Lower Mississippi River Museum,” Wilson said.

So the next time you wander around town, keep your eyes peeled. You might just see a piece of history no matter where you go.

Profile 2021: Story behind illuminating a neighborhood

For one night each December, the residents of the Glenwood Circle neighborhood dim the bright lights of Christmas decorations in... read more