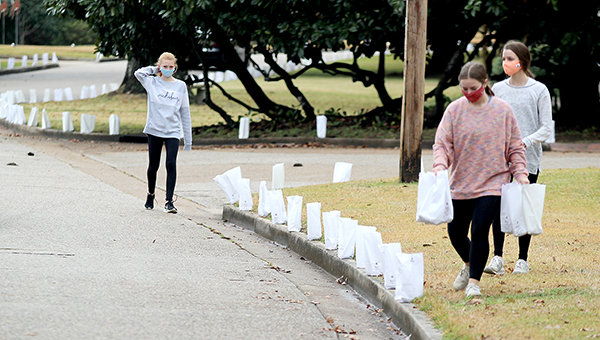 Profile 2021: Story behind illuminating a neighborhood

For one night each December, the residents of the Glenwood Circle neighborhood dim the bright lights of Christmas decorations in favor of the soft embrace of candlelight.

The lighting of hundreds of luminarias, or paper lanterns, has become a beloved neighborhood tradition since it was started 30 years ago. Bags containing candles and sand are lit at dusk and burn through the night, giving Glenwood Circle a peaceful holiday glow.

“It was something different besides riding through and looking at decorations,” said Joy Ann Hennessey, who has lived in the Glenwood Circle neighborhood since the 1950s. “They seem to want to do it every year. It is quite a sight. People enjoy it.”

Hennessey said the tradition began in 1991, when a couple named Jeanine and Danny Craig set out the first batch. The Craigs paid for the materials themselves for a few years, Hennessey said, until other neighbors joined in.

“It was a Christian thing, the light of Christ and the birth of Jesus,” Hennessey said. “Initially when this was begun, we asked people to turn their lights out and it was just a beautiful sight.”

The Craigs moved to North Carolina in the mid-1990s, but the tradition continued. At some point, it became a service project and fundraiser for local Boy Scout and Cub Scout organizations.

Greg Sparks, the Packmaster for Cub Scout Pack 7, said his pack took over the project in 2011 and has done it each year since. The exact date of the ceremony floats depends on weather and schedules but usually occurs a week or two before Christmas.

“We love it and the people love it. It’s a good outdoor activity for the boys and the families in the neighborhood,” Sparks said. “We do it as a combination service project and fundraiser. We ask people to donate.”

The luminarias are simple constructs. Several cubic yards of sand are delivered to the neighborhood early in the morning — Sparks said it has been donated in recent years by Vicksburg resident Stan Collins — and then Cub Scouts and volunteers spend a few hours scooping it into the heavy-duty paper bags. A candle is added, and the luminarias are then placed on curbs around the neighborhood.

Just before dusk, Glenwood Circle residents come out and light the candles, which then burn through the night. The following morning, the Cub Scouts return to retrieve and dispose of the spent luminarias.

“It’s pretty cool to walk around the streets with them lit. It’s different,” Sparks said. “We really appreciate the residents supporting the Cub Scout pack. We’re happy to support them.”

Profile 2021: Markings provide the ‘key’ to a great downtown tour

On sidewalks all over downtown Vicksburg lay the keys to the city — or, at least, the keys to a... read more