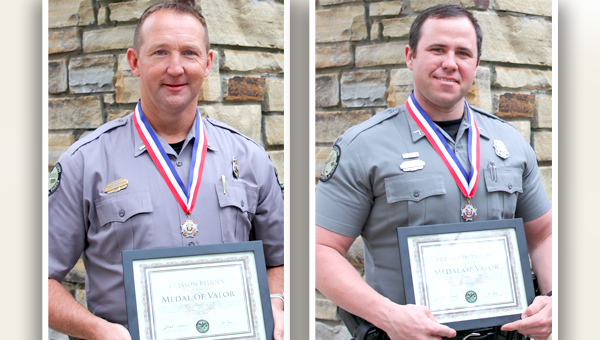 Two Mississippi Department of Wildlife, Fisheries, and Parks Conservation Officers have received the Medal of Valor for “their heroic and lifesaving efforts displayed in 2020.”

The awards, given to Pvt. Brian Tallent and Lt. Jason Redden, were presented during the March meeting of the Commission on Mississippi’s Wildlife, Fisheries, and Parks

In July, Tallent was contacted about a suspicious vehicle and possible trespassing in the Holly Springs National Forest. In responding, he soon encountered the SUV in question on a dirt road near Curry Lake and was able to block it from going any further.

The driver left his vehicle, approached Tallent, and repeatedly said he was lost and his passenger had been involved in a wreck. He insisted Tallent move his truck so he could get the passenger to a hospital. When Tallent investigated the vehicle, he immediately saw the passenger had severe burns, bruises and cuts on her entire body, and that she was struggling to breathe.

Tallent apprehended the driver and performed life-saving measures on the passenger before she was airlifted to a nearby hospital. The victim survived and the suspect received multiple charges, including attempted murder.

In December, Redden was responding to a 2 a.m. call involving a missing person in Calhoun County when he noticed a home engulfed in smoke and flames. Once he arrived on the scene of the fire, Redden heard someone inside the home.

He kicked in the door, entered the home and rescued the occupant inside along with his two pets before the house was consumed by the fire.

“I am extremely proud of the immediate, decisive actions taken by both officers,” Dr. Sam Polles, Executive Director. “We train our officers to be prepared to handle any situation they encounter.”

Claiborne County schools are not moving all students to virtual learning

Early Wednesday, officials with the Claiborne County School District announced a scheduling change ahead of statewide assessment testing. But due... read more