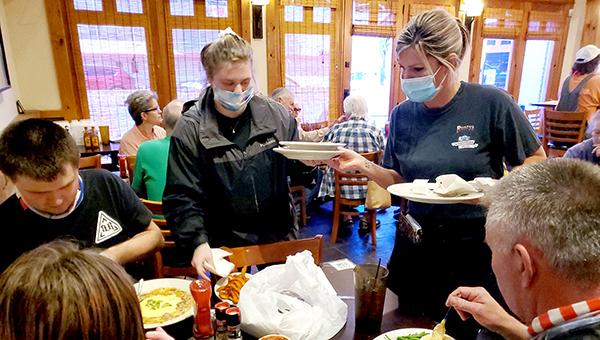 Rusty’s Riverfront Grill employees Lucy Turner, left, and Skylar Franklin attend to their customers during a busy lunch rush Friday afternoon. Restaurants were one of the businesses most affected during the COVID-19 pandemic, but have recently been allowed to return to full capacity seating without any additional restrictions. (John Surratt/The Vicksburg Post)

It was only a matter of time. For nearly three weeks, officials in Vicksburg and Warren County had watched as confirmed cases of the COVID-19 virus began popping up in cities and counties throughout Mississippi.

But, as the number of counties grew larger, and the list of counties without a reported case grew shorter, Warren County remained without a case.

It was only a matter of time.

The first confirmed case of the virus in Mississippi was reported in the Hattiesburg area on March 11, 2020. It was not until March 29, 2020, that the first case involving a Warren County resident was reported.

That first case involved a woman, who had visited and contracted the virus on a trip to New Orleans. Her symptoms — troubled breathing, fever and more — forced an emergency call that was answered by paramedics with the Vicksburg Fire Department.

Days later, it was confirmed she had contracted the virus and marked the first of what has grown to more than 4,200 cases in the yearlong pandemic.

In that time, Warren County has seen ebbs and flows of new cases and deaths. There have been times when shutdowns have been ordered and shelter-in-place orders given. Mask mandates and social distancing measures have been put in place and enforced and restrictions once put in place to mitigate the virus have been lifted as the cases have eased and vaccines have been administered.

The vaccinations, along with continued mitigation efforts, have slowed the spread of the virus as the one-year mark of the first case closes in.

In January, coming off the surge in virus spread brought about by the holidays, more than 1,100 cases were reported. In February, that number fell sharply to 238 and March is on pace to do even better, with 106 cases thus far.

For Warren County Coroner Doug Huskey and his team, the past year has been the busiest he can remember in his nearly 15 years serving the community as coroner.

“This has been the busiest year I have had as coroner. It was tremendously stressful. I saw a lot of people go through heartbreak,” Huskey said. “There were so many calls. There would be times when we could go to a home, knock on the door and somebody in the home is deceased and everyone in the home also had COVID.”

Huskey said the 117 virus-related deaths of Warren County residents during the pandemic thus far are not the only ones he and his office handled. He said there were deaths of those from Oak Grove, Delhia, Tallulah, Vidalia, and more, who were living in county nursing homes or who died at the hospital that his team worked.

The Mississippi State Department of Health reports a virus-related death in the county in which the person is a resident, not where the person dies.

“We worked a lot more than the 117,” Huskey said. “If someone had told me last March what we would have dealt with over the past year I would not have believed them.”

Huskey said the worst months for deaths during the pandemic were in August, December and January, when more than 20 deaths were reported in each month. But, he also credited the support of Warren County Emergency Management Director John Elfer and his team, along with the paramedics of the Vicksburg Fire Department in supporting his office’s efforts.

“If anything ever happened, if we ever needed anything — masks, hand sanitizer, anything — all we had to do was call John and he was going to take care of it,” Huskey said. “Our entire community did well; everyone from the sheriff to the mayor, to emergency management, and our paramedics. They helped us so much. They are awesome.”

At the forefront of the fight against this virus

For Dr. Dan Edney, with Medical Associates of Vicksburg and since January the state’s chief medical officer, the fight against COVID-19 has been ongoing well before the first case was confirmed in Warren County.

Edney provided primary care to a Mississippi Department of Corrections inmate who had contracted the virus as he was receiving care at Promise Hospital in Vicksburg.

“He lived,” Edney said, thinking back to that case that came just days before the first confirmed case involving a Warren County resident.

Since then, Edney has treated countless patients and been among state medical officials lending key advice to local and state officials, including serving on the Gov. Tate Reeves’ COVID-19 task force.

“A year ago, we did not even have a good idea of how this virus was transmitted and now we know everything there is to know about its transmission and able to monitor its transmission pretty closely. A year ago, we had no idea of what was ahead of us. We were hoping it would be more along the lines of the flu pandemic, which you kind of burn through and then get over it and this is becoming more endemic — meaning it is not wanting to go away — it is doing better but it is still hanging around,” Edney said. “We had hoped that summer would knock it down and it didn’t. We had hoped that time would knock it down and it didn’t. And it has really taken everybody learning how to live the way we have been living the past six months. When you see 4-year-olds walking around with masks on like it is second nature it shows how this virus has transformed us. “

In looking back to last spring, when the fight against the virus was new to everyone — including medical officials — Edney said early on it was a fight to simply keep those who had contracted the virus alive.

“Today, we are learning now how it mutates, what it is going to take to defeat the variants, in terms of the virus itself and how to fight it, we have learned so much more than we knew a year ago,” he said. “A year ago we were struggling to keep people alive. Our success rate with keeping people alive through the worst of it is so much better.”

He also said it remains a problem for people to get complacent with this virus and accepting of the current case numbers and deaths.

“It is bothersome to us in public health because our concern is that it is just going to hang here. And if just continues to hang here then we are going to continue to have 10, 15, 20 people die a day. And now we are used to that,” Edney said. “Everybody is just thankful it is not 300 dying a day but 18 months ago, if we had 10 people dying from a disease every day, and it wasn’t going to stop, then we all would have freaked out.”

Now a year into the fight, Edney said the focus has been on getting the community vaccinated and crushing the virus through that route.

“And a year ago we had no idea how long it would take to develop a vaccine, and if we could even develop a vaccine, and now we have three highly effective vaccines,” he said. “Our next big hurdle to cross is to try to get vaccine rates up high enough to extinguish it that way, which is going to take herd immunity. We are not anywhere close to that right now. We won’t get herd immunity until we get children immune.”

Edney, though, remains proud of what Vicksburg and Warren County have done as a community.

“I think we have been exemplary. I am very proud as a public health officer to be from Warren County. I don’t have anything to be embarrassed about,” Edney said, praising the public for following the guidelines and public health orders. “Really, our leadership took bold stands early on and if you remember, city and county leadership were actually ahead of state government in protecting the public and have maintained that stance — to do what we had to do to protect the public irrespective of political hits.”