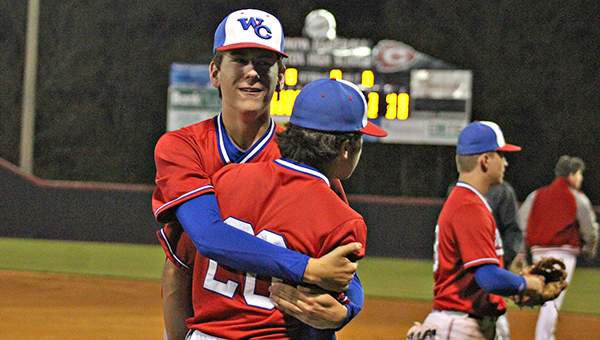 Warren Central pitcher Bo Broome (26) gets a celebratory hug from teammate Jacob Oldenburg after getting the final out Friday in a 3-2 victory over Clinton. (Ernest Bowker/The Vicksburg Post)

Vikings bounce back to beat Clinton

CLINTON — After getting run-ruled twice and outscored 28-5 by Clinton in two games this week, Warren Central baseball coach Randy Broome went into Friday’s matchup with the Arrows bracing for the worst.

What he got was the Vikings’ very best.

Warren Central used a few manufactured runs and a couple of gutsy pitching performances to turn the tables by beating Clinton 3-2.

Warren Central (4-13, 1-2 MHSAA Region 4-6A) snapped a four-game losing streak. Seth Sterling and Ismael Trujillo each had RBI singles, and another run scored on an error. Trujillo’s hit was an infield single. Bo Broome scored a run after reaching on a bunt single. The Vikings only had five hits in the game.

“We so easily could have looked ahead. Easter break is this weekend, we could have easily come in with our tails tucked and said let’s go home in five (innings),” Randy Broome said. “We didn’t, and maybe that shows a sign of us growing up a little bit. That’s a good thing.”

Sophomore Kylan Landers gave the Vikings a big lift by throwing five scoreless innings. They had used five pitchers in the first two games against Clinton this week, and Randy Broome said most of the roster was on deck to pitch if needed.

Instead, Landers allowed just two hits and two walks, and pitched out of a two-on, one-out jam before exiting. Clinton’s Jacob Gray was tagged out after teammate Ashton Johnson missed a squeeze bunt, and Landers then got a ground ball out to end the inning. 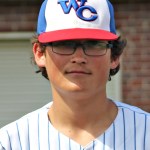 “I was proud of Kylan’s effort. Our arms had been roughed up to this point. Everything we’re throwing at them is getting hammered. Our plan was, we had eight pitchers on the list today — eight,” Randy Broome said. “Kylan kept going out and giving us zeroes, and next thing you know we look up and we’re in the sixth. Hell of an effort on his part.”

Reliever Bo Broome, the coach’s son, turned in a similar kind of performance to pick up a hard-earned save.

Broome entered the game in the sixth inning with the bases loaded and one out. He got Tytrez Carr to hit a grounder up the middle that Joey Greer fielded. Greer stepped on second base for an out as Clinton’s first run of the game scored, but his relay throw to first was high.

Clinton’s Cole Manuel, thinking the ball was overthrown, tried to scoot home from third. WC first baseman Jack Wright had caught the high throw, however, and alertly threw to the plate. Manuel was tagged out after a rundown to end the inning.

Manuel was the second Clinton runner tagged out between third and home. The Arrows also had a runner thrown out trying to steal second.

“They’ve been aggressive,” Randy Broome said of the Arrows. “They’re down, they’re fighting, and we’ve been shown to not throw it accurately. I’m sure that was part of the report they got. Fortunately we were able to execute and get outs on those.”

Clinton had one last gasp in the bottom of the seventh inning. It got one run in on a sacrifice fly by Johnson to cut it to 3-2, and a pair of walks loaded the bases with two outs.

Bo Broome got Manuel to fly out to right field, however, and the Vikings escaped with a needed victory.

“Clinton came out swinging. They punched us in the face. It just is what it is. Regardless of the outcome tonight, I was proud of our effort,” Randy Broome said. “The grind it’s been to this point, to hang in there for a seven-inning dogfight in a game like that, I can’t be more proud.”

Brayson Morson tripled and scored two runs for PCA (7-11, 4-2 MAIS District 4-2A), and Gage Palmer went 2-for-4 with one RBI and one run scored. Palmer also pitched five innings and allowed six runs, three earned, while striking out six.

PCA scored three unearned runs in the top of the fifth inning to cut a four-run deficit to one, 5-4. Benton (7-5, 4-3), however, scored one run in the bottom of the inning and two more in the sixth — Middleton plated on with an RBI double — to pull away.

The Vicksburg Missy Gators used a strong finishing kick to break out of a recent slump. Lexi Kistler went 2-for-3... read more