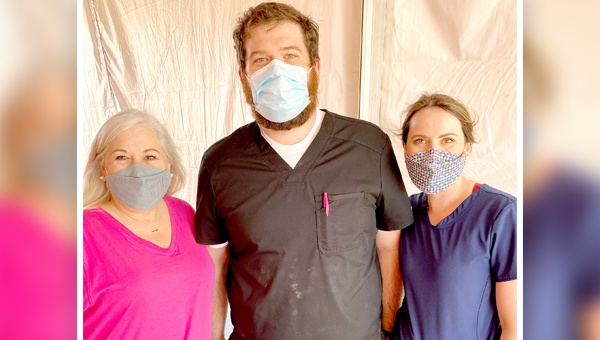 Kathy Walters, along with her children, Evan Walters and Abigail Harper, pose for a quick photo while volunteering Monday at the county’s COVID-19 drive-thru vaccination site at the former Vicksburg Mall.

The Walters family is no stranger to helping those in — and outside — their community.

During summers they have worked with Service Over Self, the one-week-long youth-led mission project, and both Abigail Walters Harper and her brother Evan Walters have participated in mission trips to Honduras.

Monday, the brother and sister, along with their mother, Kathy, all volunteered at the county’s drive-thru COVID-19 vaccination site.

Kathy said she has volunteered at the site several times before, where she helps out with paperwork, but this was the first time Abigail and Evan have been able to volunteer.

Both brother and sister are nurses and came out on one of their off days to help administer shots.

“It was just having worked in the COVID unit for so long and seeing what it has done to the community,” Evan said, as to why he decided to help out.

“It was just sad and devastating to see the people in there and this was just a little way to be giving back and to do as much as we can to stop this thing (virus) from spreading,” he said.

Abigail, who is a labor and delivery nurse, said she, like her brother, wanted to help.

“I thought it was awesome to help out and be a part of this thing for my community and it has been really good to know I was helping slow the spread of the virus,” Abigail said.

There were 765 vaccines administered Monday, Kathy said, and she could not have been more proud her children had been part of helping out.

“I was just so proud of them. Just knowing they were volunteering their time to help others. I thought it was wonderful,” Kathy said. “It was a proud mama moment, and I don’t know how many people I told that they were my son and daughter.”

Monday was Kathy’s fourth time to help out at the vaccination site, but not the first time to lend a hand during the pandemic.

She was involved with the Masks Now Coalition, a national volunteer organization that gives people free masks.

Asked if they would help out again, all three said yes.

“It was a really good experience,” Abigail said, and it was good seeing other nurses and volunteers out there helping.”

Abigail said it had also been rewarding to hear from those receiving the vaccine.

“It was just really awesome to see how grateful everyone was,” she said. “A few older couples were telling us how great they thought the experience was and how they were so thankful that they had a community like this where people come together.”