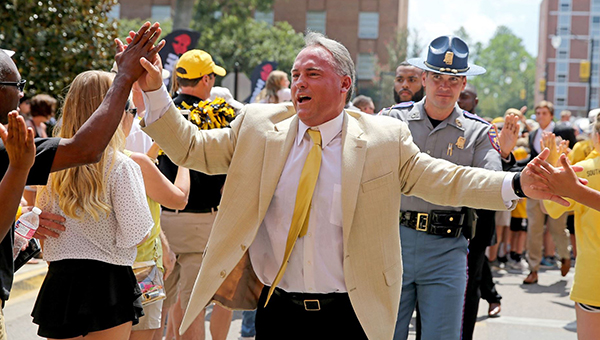 Former Southern Miss head coach and current Mississippi State assistant Jay Hopson is among a number of college and NFL coaches who are either from Vicksburg or have spent time working here. (Southern Miss Athletics)

Sports column: Vicksburg is the Cradle of Coaches

I was bouncing around the Arizona Cardinals’ web site on Wednesday, looking for news on our resident NFL star Malcolm Butler, when I stumbled across another Vicksburg connection.

One of the Cardinals’ assistant coaches, Jerry Sullivan, once coached here. Sullivan is a legendary name in NFL circles that most casual fans — myself included — have never heard of. He’s carved out a 50-year career as a position coach in college and the NFL. Wide receivers are his specialty, and he’s mentored some of the best to ever play the game.

Sullivan played college football at Delta State, and spent one season in 1970 on the staff at Cooper High School here in Vicksburg.

I wasn’t able to find much more than that through a quick search, but thought it was an interesting piece of trivia. It also got me thinking about some of the remarkable football coaches that have passed through Vicksburg on their way to bigger and better things.

Mike Campbell was among the first. He was Carr Central’s head coach from 1953-55 and led the Greenies to an 11-0 record and the Big 8 Conference championship — the equivalent of a Class 6A title today — in his last season.

Campbell promptly cashed in his chips and took a job on Darrell Royal’s staff at Mississippi State. Campbell followed Royal to Washington, and then to Texas, and was the Hall of Fame coach’s defensive coordinator for more than 20 years.

More recently, we’ve had ex-players turn into coaches. Jay Hopson starred at Warren Central before launching a 30-year coaching career that has included stints as the head coach at Alcorn and Southern Miss.

Norman Joseph, who played at Vicksburg High in the early 1970s, has had head coaching gigs at Belhaven University and Mississippi College.

Another Warren Central product, Larry Warner, has bounced around a bit before landing, for the time being, as the running backs coach at Arkansas-Pine Bluff.

All of these men undoubtedly have their own miniature “coaching trees” of people they’ve inspired to follow in their footsteps, and those are merely a handful of people from Vicksburg who have gone into the profession. There are certainly many, many more who have coached high school football and helped continue a century-old tradition of teaching the game to the next generation.

Miami University in Ohio has a trademark on the term “The Cradle of Coaches” for the number of coaches it has produced. Vicksburg, though, might have its own claim to the crown.

Vikings bounce back to beat Clinton

CLINTON — After getting run-ruled twice and outscored 28-5 by Clinton in two games this week, Warren Central baseball coach... read more