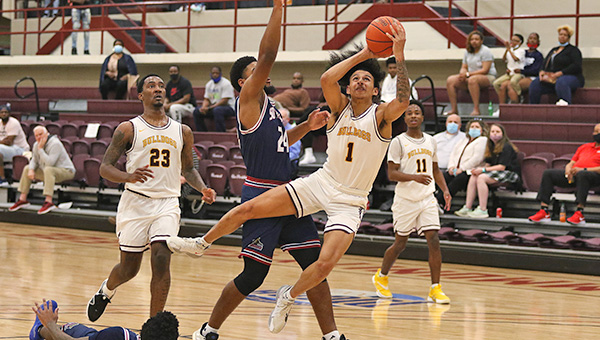 UTICA — Hinds Community College’s men’s basketball team is inching ever closer to accomplishing something it has never done. Hinds rallied from a 13-point halftime deficit Tuesday to beat Southwest Mississippi 81-78 in the third round of the NJCAA Region 23 tournament.

Freshmen Caleb McCarty and Kyle Hayman poured in 15 and 10 points, respectively, in a scintillating second half of action on the Bulldogs’ home floor.

“I’ve been a part of all types of games — NCAA tourney, state championships and more — but this is probably one of the greatest comebacks in my career,” Hinds head coach Yusef Fitzgerald said. “Down 16 at one point, these young men never quit, and were able to fight back to beat a very tough Southwest team.”

“To be in the final four of this league is tremendous and we’ve got a tough task ahead of us. We will prepare for our opponent and pray we can keep moving on,” Fitzgerald said.

Jordan Johnson led Hinds in scoring against Southwest, with 24 points to go along with six assists and four steals. Damerius Wash had another double-double, with 22 points and 10 rebounds, plus four steals.

McCarty added three rebounds and four blocked shots. Hayman was a rebound away from a double-double of his own, with nine rebounds to go along with his 10 points.
Hinds went 24-for-31 at the free throw line.

Tada Stricklen hit four 3-pointers in the first half to propel Southwest Mississippi (8-10) to a 46-28 lead with 2:12 left. Hinds, however, closed the gap to 48-35 by halftime and then kept on coming in the second half.

Hinds outscored Southwest 28-13 over the first 10 1/2 minutes of the second half and took a 63-61 lead with 9:27 to go. The teams traded small runs from there, until a couple of missed free throws by Southwest in the final minute sealed the outcome.

Stricklen led the Bears with 22 points. Mazae Blake followed with 12 points, while Xyshan Jenkins finished the night with 10 points.

Kalia Bland turned in a pretty spicy performance in the first round of the high school track and field postseason.... read more