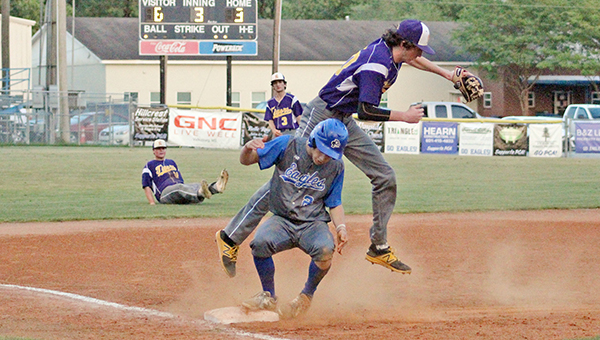 Playing in the MAIS baseball playoffs for the first time since 2015 was cause for excitement among Porter’s Chapel Academy’s players — maybe a little too much.

The Eagles committed seven errors that led to five unearned runs, added a few mental mistakes on top of it, and could not overcome an early deficit as they lost 9-4 to Centreville Academy in Game 1 of a first-round MAIS Class 2A playoff series on Tuesday.

PCA coach Paul Ashley blamed some of the jitters on his players getting too hyped up early in the day, instead of pacing themselves for the game in the evening.

“We started out flat. A lot of these guys were hyped up all day. It’s the first time they’ve made the playoffs, even the older guys, and they just came out flat,” Ashley said. “We’ll just have to go back Friday and get two of them. We dug ourselves in a hole.”

Game 2 of the best-of-three series will be Friday at 4:30 p.m. at Centreville. If Porter’s Chapel (8-13) wins, Game 3 would follow afterward. PCA needs to win both games Friday to advance, while Centreville (8-11) only needs to win one.

The winner of this series advanced to play Claiborne Academy next week.

Ashley said there was some comfort — and confidence — in knowing the Eagles stayed in Tuesday’s game despite their self-inflicted wounds. An error in the second inning allowed two runs to score, and another in the third brought in one run while setting up a two-RBI double by Kody Watson. Watson’s hit put Centreville ahead 6-1, and PCA was playing from behind the rest of the night.

“We were still in it. That was, by far, not one of our best games and we didn’t get just blown out,” Ashley said. “It goes to show if we come out and start out playing right, they don’t jump up three or four on us, and we’ll be fine.”

PCA did claw its way back into Game 1, at least for a little while. Jace Riggs hit an RBI double and scored on a single by John Wyatt Massey in the bottom of the third inning, and then courtesy runner Brayson Morson scored on a balk to cut it to 6-4.

Centreville padded its lead with single runs in the fourth, sixth and seventh innings, however — errors contributed to two of the three runs — and kept the Eagles at bay at the plate. PCA left runners on base in three of the last four innings.

“About the fourth inning we got things going. Then we had another error and things snowballed from there a little,” Ashley said. “We just couldn’t really get the timely hits at the end. The kids have come a long way. We’ll clean that up and be ready to go Friday and beat them twice.”

Payton Jones led Centreville’s offense by going 3-for-4 with two RBIs, and Watson drove in three runs. Kade Arnold was 2-for-4 with one RBI and two runs scored. Pitcher Ben Garrett allowed four runs and seven hits in six innings, but struck out eight and did not walk a batter.

Gage Palmer had two hits, including a double, and an RBI for PCA. Taylor Osborne doubled and scored a run, and also pitched five innings of relief. Osborne allowed four runs — only one earned — did not walk a batter and struck out seven to keep the Eagles in the game following a shaky start by Chase Hearn.

The errors, as well as the overall effort, left Ashley frustrated, however.

“It’s very frustrating when you know you’ve got the guys to make those routine plays, and even the harder ones that they made errors on,” Ashley said. “We’ll come back to practice tomorrow and try to clean that up. Maybe the guys will have a little better heads and the coaches will prepare them better. That’s the goal now.”